The Semi-Annual Die Cutting Sale is Here! Shop and Save Up To 50% on Die Cutting | Details Here.
× 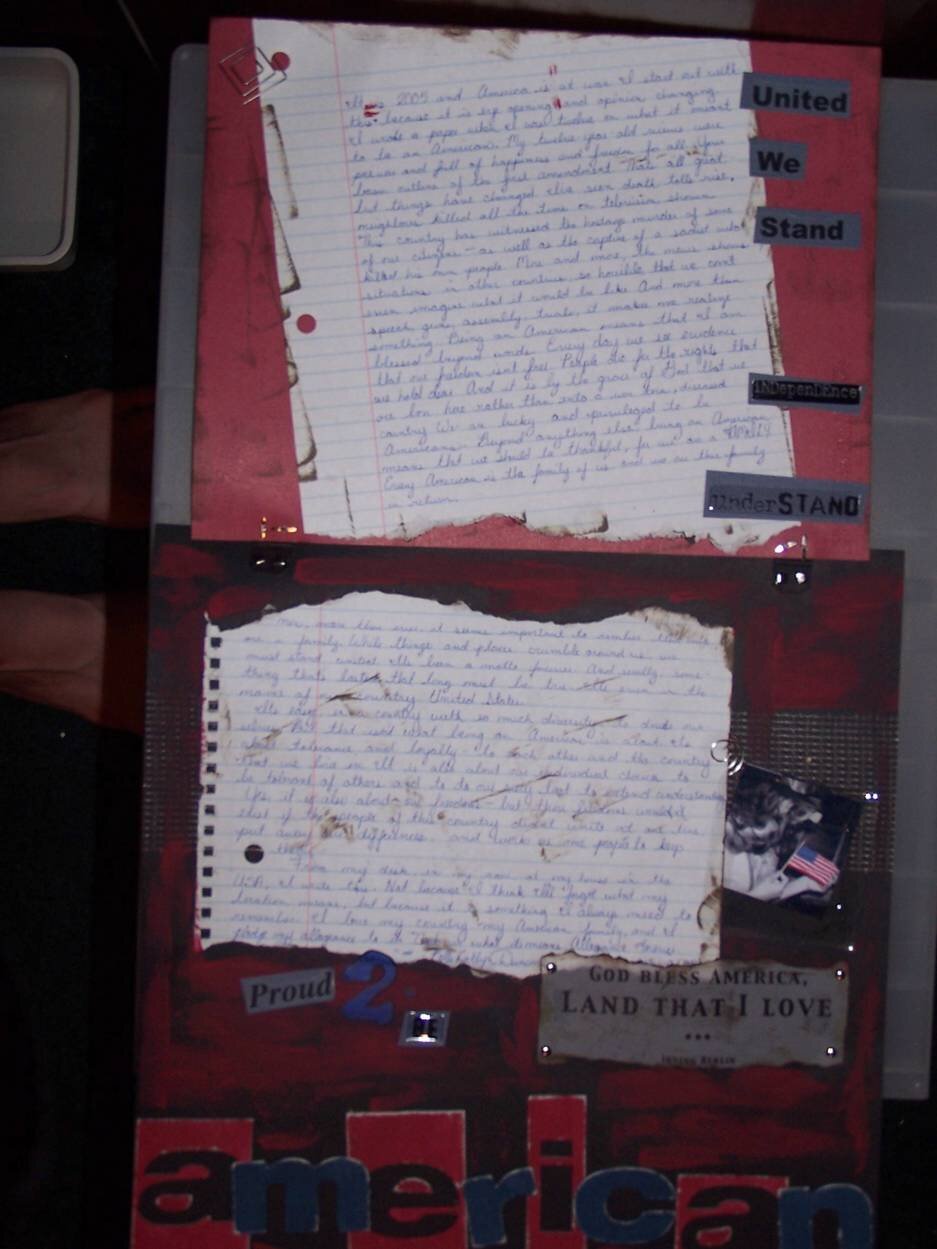 Give a Cheer
it takes a lot of courage to write something like this. it is beautiful. congratulations on a great job!

Firediva
May 30, 2005
WOW girl! You really can write! Aside from the look of the layout..which is exceptionally cool! The journaling brings a chill and a pride! This really is an amazing layout!

Scrapbookjen
May 24, 2005
I love the journaling -- from the heart. And I absolutely love that you have put it in your own handwriting. We are absolutely blessed to live in this great country! This layout is an American treasure!!!

Leisa_T
May 23, 2005
Wow I really love this. You told so well an you're right we all are lucky to live in a free country. Me as well as my kids. Love MJ from Holland

Scrap the same pic INSIDE

The inside flap of my layout for the Scrap the same pic challenge. The journaling reads:

It is 2005 and America is at war. I start out with this because it is eye opening and opinion changing. I wrote a paper when I was twelve on what it meant to be an American. My twelve year old views were pre-war and full of happiness and freedom for all. Your basic outline of the first amendment. That's all great, but things have changed. We've seen death tolls rise, neighbors killed all the time, on television are shown. This country has witnessed the hostage murders of some of our own citizens -- as well as the capture of a sadist who killed his own people. More and more, the news shows situations in other countries, so horrible, that we can't even imagine what it would be like. And more than speech, guns, assembly, trials...it makes me realize something. Being an American means that I am blessed beyond words. Every day we see evidence that our freedom isn't free. People die for the rights that we hold so dear. And it is by the grade of God that we are born here rather than into a war torn, or disease ridden country. We are lucky and privileged to be Americans. Beyond anything else, being an American means that we should be Thankful, for we are a FAMILY. Every American is the family of us, and we are their family in return.

Now, more than ever, it seems important to remember that we are a family. While things and places crumble all around us, we must stand united. It's been a motto forever. And really, something that's lasted that long must be true. It's even in the name of the country. United States.

It's easy, in a country with so much diversity, to divide ourselves. But that isn't what being an American is about. It's about tolerance and loyalty. To each other, and to the country that we live in. It's also about our individual choices to be tolerant of others and to do our very best to extend understanding.

Yes, it is also about our freedoms -- but those freedoms wouldn't exist if the people of this country didn't unite at one time, pur away their differences, and work as one people to get and keep them.

From my desk, in my room at my house in the USA, I write this. Not because I think I'll forget what my location means, but because it is something I always need to remember. I love my country, my american family, and I pledge my allegiance to it. That, above all, is what it means. Allegiance. Forever.


I used my own handwriting because I thought it was important that it come from ME and not from a computer. Included a second picture, and the words "Proud 2 be", which fits over the large American at the bottom.

See All Projects by BobbiJaye