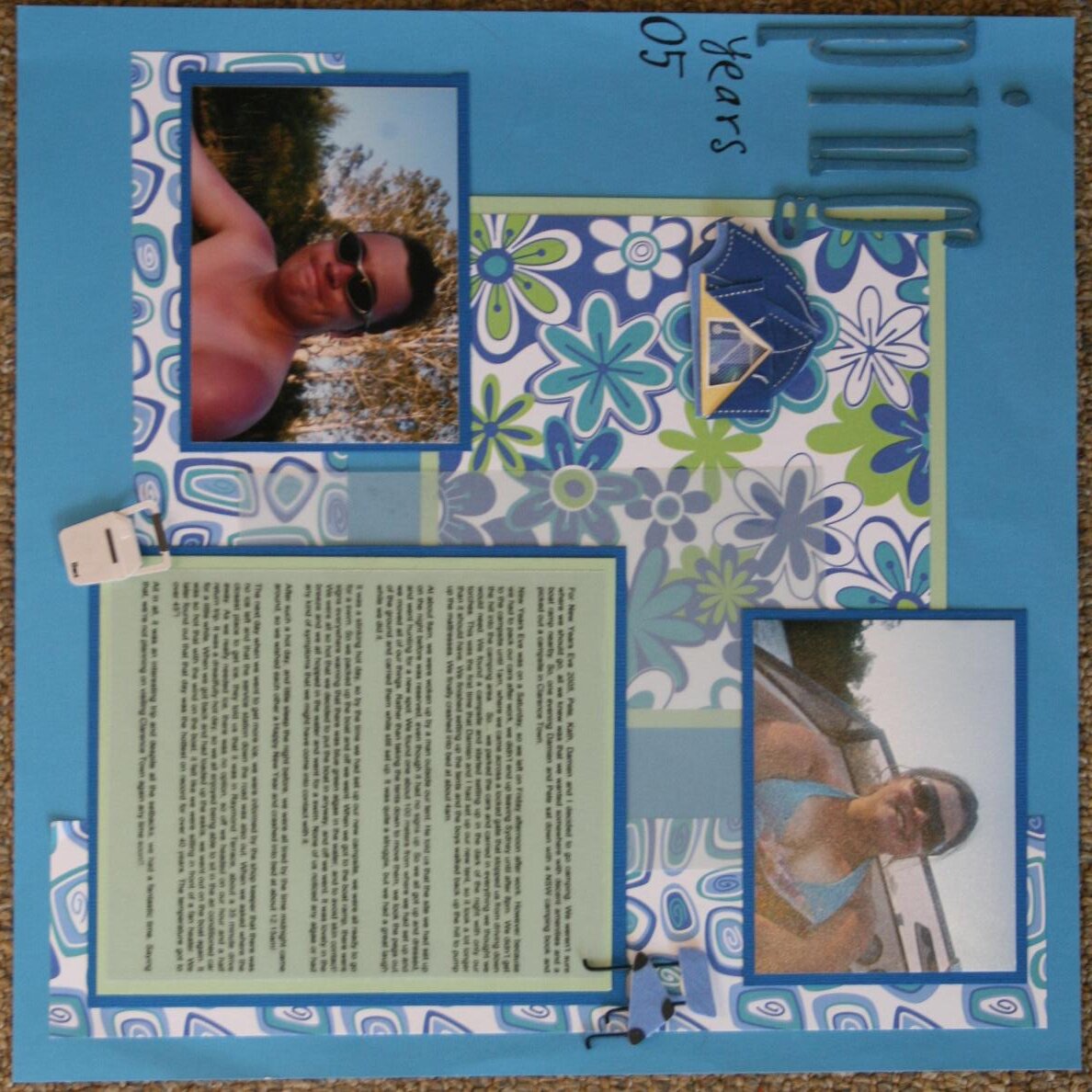 Give a Cheer
Awesome journaling!!!! I love the colors!!!

Journaling Reads: For New Years Eve 2005, Pete, Kath, Damien and I decided to go camping. We werent sure where we should go, all we knew was that we wanted somewhere with decent amenities and a boat ramp nearby. So, one evening Damien and Pete sat down with a NSW camping book and picked out a campsite in Clarence Town.

New Years Eve was on a Saturday, so we left on Friday afternoon after work. However because we had to pack our cars after work, we didnt end up leaving Sydney until after 8pm. We didnt get to the campsite until 1am, where we came across a locked gate that stopped us from driving down the hill into the camping area. So we parked the cars and carried in everything we thought we would need. We found a campsite and started setting up in the dark of the night with only our torches. This was the first time that Damien and I had set up our new tent, so it took a lot longer than it should have. We finished setting up the tents and the boys walked back up the hill to pump up the mattresses. We finally crashed into bed at about 4am.

At about 8am, we were woken up by a man outside our tent. He told us that the site we had set up on the night before was reserved, even though it had no signs up. So we all got up and dressed, and went hunting for a new spot. We found one about 100 meters from where we had set up and we moved all of our things. Rather than taking the tents down to move them, we took the pegs out of the ground and carried them while still set up. It was quite a struggle, but we had a great laugh while we did it.

It was a stinking hot day, so by the time we had set up our new campsite, we were all ready to go for a swim. So we packed up the boat and off we went. When we got to the boat ramp, there were signs everywhere warning that there was blue green algae in the water, and to avoid skin contact! We were all so hot that we decided to put the boat in anyway, and off we went. It was lovely in the breeze and we all hopped in the water and went for a swim. None of us noticed any algae or had any kind of symptoms that we might have come into contact with it.

After such a hot day, and little sleep the night before, we were all tired by the time midnight came around, so we wished each other a Happy New Year and crashed into bed at about 12:15am!

The next day when we went to get more ice, we were informed by the shop keeper that there was no ice left and that the service station down the road was also out. When we asked where the closest place to get ice, they told us that it was in Raymond Terrace, about a 35 minute drive away. As we really needed ice, there was no option, so off we headed on our hour and a half return trip. It was a dreadfully hot day, so we all enjoyed being able to sit in the air conditioned car for a little while. When we got back and had loaded up the eskis, we went out on the boat again. It was so hot that with the wind on the boat, it felt like we were sitting in front of a fan heater. We later found out that that day was the hottest on record for over 40 years. The temperature got to over 45o!

All in all, it was an interesting trip and despite all the setbacks, we had a fantastic time. Saying that, were not planning on visiting Clarence Town again any time soon!!

See All Projects by Georgieeliz