Mixed Media UP TO 50% OFF + FREE GIFT
Save on Ink, Blending, Stamping, Tools AND MORE! | Details Here.
× 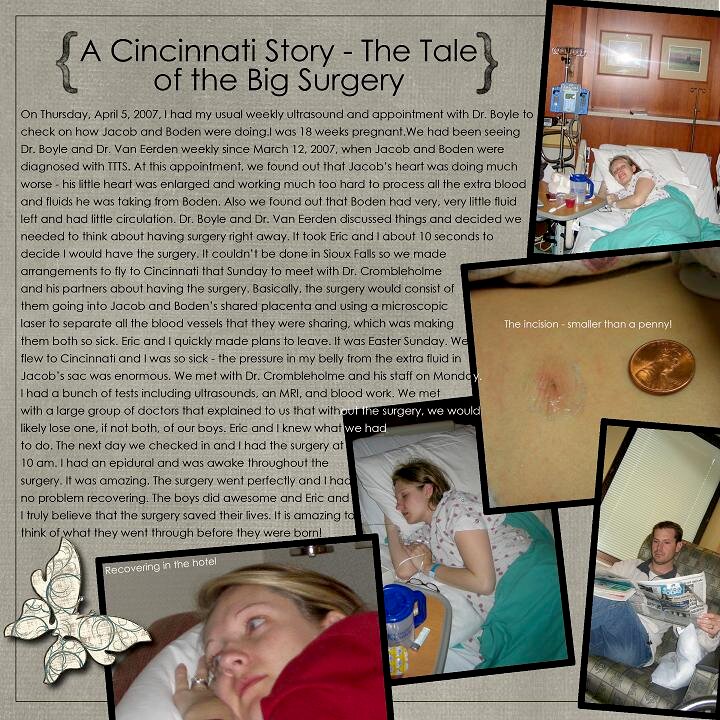 Give a Cheer
I had many sugeries in Cincinnati's childrens' hospitals. They're some of the best in the world. Great journaling and very nice LO

AshleyLadd
June 23, 2011
Wow, such amazing journaling!!! That picture of your incision with the penny next to it is amazing!

LeahR
June 18, 2008
I remember reading this one over at Oscraps and it is so moving!! Such a journey you have been through!

Journaling:
On Thursday, April 5, 2007, I had my usual weekly ultrasound and appointment with Dr. Boyle to
check on how Jacob and Boden were doing.I was 18 weeks pregnant.We had been seeing Dr. Boyle and Dr. Van Eerden weekly since March 12, 2007, when Jacob and Boden were diagnosed with TTTS. At this appointment, we found out that Jacobs heart was doing much worse - his little heart was enlarged and working much too hard to process all the extra blood and fluids he was taking from Boden. Also we found out that Boden had very, very little fluid left and had little circulation. Dr. Boyle and Dr. Van Eerden discussed things and decided we needed to think about having surgery right away. It took Eric and I about 10 seconds to decide I would have the surgery. It couldnt be done in Sioux Falls so we made arrangements to fly to Cincinnati that Sunday to meet with Dr. Crombleholme and his partners about having the surgery. Basically, the surgery would consist of them going into Jacob and Bodens shared placenta and using a microscopic laser to separate all the blood vessels that they were sharing, which was making them both so sick. Eric and I quickly made plans to leave. It was Easter Sunday. We flew to Cincinnati and I was so sick - the pressure in my belly from the extra fluid in Jacobs sac was enormous. We met with Dr. Crombleholme and his staff on Monday. I had a bunch of tests including ultrasounds, an MRI, and blood work. We met with a large group of doctors that explained to us that without the surgery, we would likely lose one, if not both, of our boys. Eric and I knew what we had to do. The next day we checked in and I had the surgery at 10 am. I had an epidural and was awake throughout the surgery. It was amazing. The surgery went perfectly and I had no problem recovering. The boys did awesome and Eric and I truly believe that the surgery saved their lives. It is amazing to think of what they went through before they were born!

See All Projects by T_a_l_i