Declutter Your Craft Room! Storage & Organization UP TO 50% OFF + FREE Gift | Details Here.
× 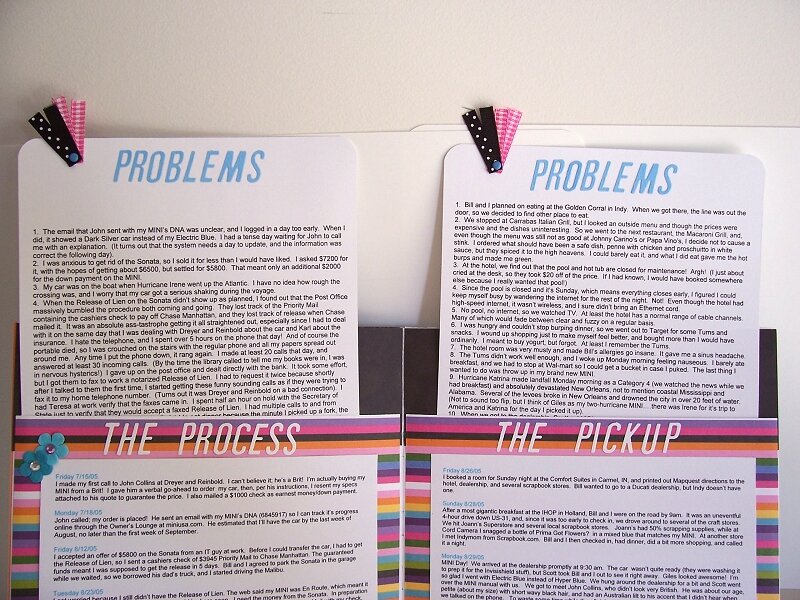 I ran into so many stressful difficulties during the process and pickup of my MINI that I just had to record the info. So I made separate pages to slide into the related pockets.

The Journaling for The Process Problems reads:
1. The email that John sent with my MINIs DNA was unclear, and I logged in a day too early. When I did, it showed a Dark Silver car instead of my Electric Blue. I had a tense day waiting for John to call me with an explanation. (It turns out that the system needs a day to update, and the information was correct the following day).
2. I was anxious to get rid of the Sonata, so I sold it for less than I would have liked. I asked $7200 for it, with the hopes of getting about $6500, but settled for $5800. That meant only an additional $2000 for the down payment on the MINI.
3. My car was on the boat when Hurricane Irene went up the Atlantic. I have no idea how rough the crossing was, and I worry that my car got a serious shaking during the voyage.
4. When the Release of Lien on the Sonata didnt show up as planned, I found out that the Post Office massively bumbled the procedure both coming and going. They lost track of the Priority Mail containing the cashiers check to pay off Chase Manhattan, and they lost track of release when Chase mailed it. It was an absolute ass-tastrophe getting it all straightened out, especially since I had to deal with it on the same day that I was dealing with Dreyer and Reinbold about the car and Karl about the insurance. I hate the telephone, and I spent over 5 hours on the phone that day! And of course the portable died, so I was crouched on the stairs with the regular phone and all my papers spread out around me. Any time I put the phone down, it rang again. I made at least 20 calls that day, and answered at least 30 incoming calls. (By the time the library called to tell me my books were in, I was in nervous hysterics!) I gave up on the post office and dealt directly with the bank. It took some effort, but I got them to fax to work a notarized Release of Lien. I had to request it twice because shortly after I talked to them the first time, I started getting these funny sounding calls as if they were trying to fax it to my home telephone number. (Turns out it was Dreyer and Reinbold on a bad connection). I had Teresa at work verify that the faxes came in. I spent half an hour on hold with the Secretary of State just to verify that they would accept a faxed Release of Lien. I had multiple calls to and from Dreyer and Reinbold and Karl. It took all night to eat dinner because the minute I picked up a fork, the phone would ring again. I told Bill there were hidden cameras and everyone was watching and waiting until I tried to eat to call. J I was a nervous wreck by bed time.
5. I couldnt find a reasonably priced hotel with everything I wanted in the Indianapolis area. I didnt want to spend $85 on a hotel room, but I wanted a pool and a good breakfast spread. After spending a couple of hours searching the internet, I finally caved and booked at the Comfort Suites for $83 a night. At least they had a pool AND hot tub, and I looked forward to soaking away my stress.

The journaling for The Pickup Problems reads:
1. Bill and I planned on eating at the Golden Corral in Indy. When we got there, the line was out the door, so we decided to find other place to eat.
2. We stopped at Carrabas Italian Grill, but I looked an outside menu and though the prices were expensive and the dishes uninteresting. So we went to the next restaurant, the Macaroni Grill, and, even though the menu was still not as good at Johnny Carinos or Papa Vinos, I decide not to cause a stink. I ordered what should have been a safe dish, penne with chicken and proschuitto in white sauce, but they spiced it to the high heavens. I could barely eat it, and what I did eat gave me the hot burps and made me green.
3. At the hotel, we find out that the pool and hot tub are closed for maintenance! Argh! (I just about cried at the desk, so they took $20 off of the price. If I had known, I would have booked somewhere else because I really wanted that pool!)
4. Since the pool is closed and its Sunday, which means everything closes early, I figured I could keep myself busy by wandering the internet for the rest of the night. Not! Even though the hotel had high-speed internet, it wasnt wireless, and I sure didnt bring an Ethernet cord.
5. No pool, no internet, so we watched TV. At least the hotel has a normal range of cable channels. Many of which would fade between clear and fuzzy on a regular basis.
6. I was hungry and couldnt stop burping dinner, so we went out to Target for some Tums and snacks. I wound up shopping just to make myself feel better, and bought more than I would have ordinarily. I meant to buy yogurt, but forgot. At least I remember the Tums.
7. The hotel room was very musty and made Bills allergies go insane. It gave me a sinus headache.
8. The Tums didnt work well enough, and I woke up Monday morning feeling nauseous. I barely ate breakfast, and we had to stop at Wal-mart so I could get a bucket in case I puked. The last thing I wanted to do was throw up in my brand new MINI.
9. Hurricane Katrina made landfall Monday morning as a Category 4 (we watched the news while we had breakfast) and absolutely devastated New Orleans, not to mention coastal Mississippi and Alabama. Several of the levees broke in New Orleans and drowned the city in over 20 feet of water. (Not to sound too flip, but I think of Giles as my two-hurricane MINI.there was Irene for its trip to America and Katrina for the day I picked it up).
10. When we got to the dealership, Scott said Oh, crap, youre here. We werent expecting you. (Which is a lie. John Collins and I made specific plans for 9:30 Monday). The car wasnt ready, and I just looked at Bill and said, I told you so. So many things had gone wrong leading up to this point, I had told him the night before I figured the car wouldnt be ready!
11. I wanted to take a lot of pictures of us at the dealership, but the batteries in the camera died, and the brand-new, out of the package rechargeables were not charged. I got six pictures before the camera died, and missed the picture of the car in front of the dealership that I really wanted.

See All Projects by KarenTKD