Scrapbook.com Exclusives On Super Sale! Save up to 50% | Details Here.
× 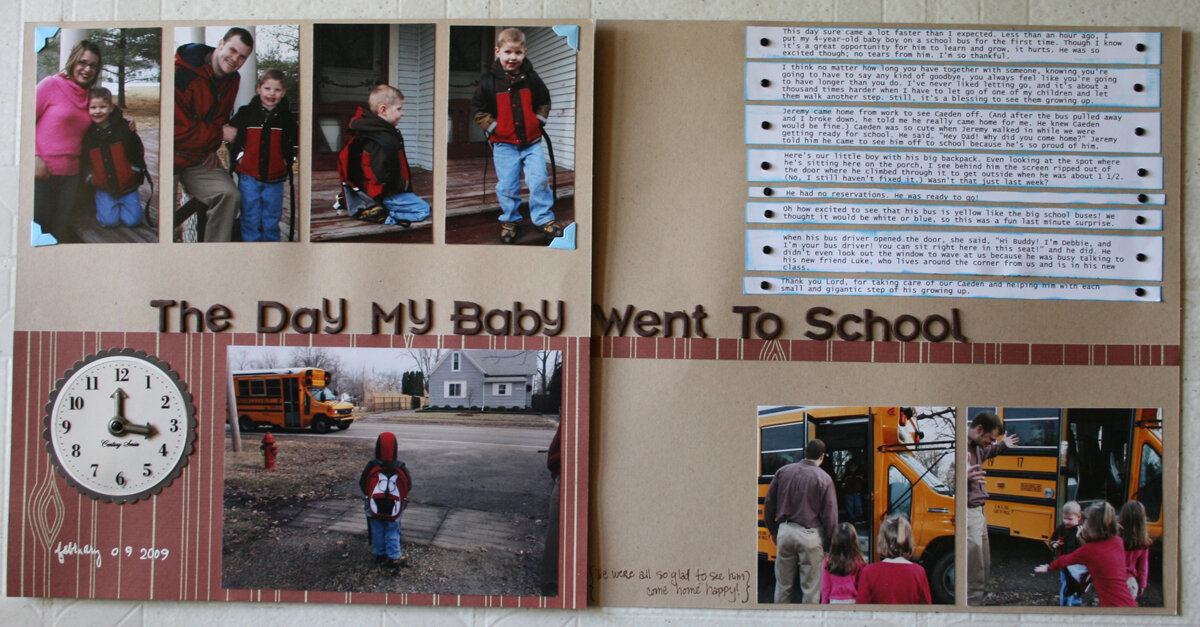 The Day My Baby Went to School

This day sure came a lot faster than I expected. Less than an hour ago, I put my 4-year-old baby boy on a school bus for the first time. Though I know it's a great opportunity for him to learn and grow, it hurts. He was so excited though; no tears from him. I'm so thankful.

Jeremy came home from work to see Caeden off. (And after the bus pulled away and I broke down, he told me he really came home for me. He knew Caeden would be fine.) Caeden was so cute when Jeremy walked in while we were getting ready for school. He said, "Hey Dad! Why did you come home?" Jeremy told him he came to see him off to school because he's so proud of him.

I think no matter how long you have together with someone, knowing you're going to have to say any kind of goodbye, you always feel like you're going to have longer than you do. I've never liked letting go, and it's about a thousand times harder when I have to let go of one of my children and let them walk another step. Still, it's a blessing to see them growing up.

Here's our little boy with his big backpack. Even looking at the spot where he's sitting here on the porch, I see behind him the screen ripped out of the door where he climbed through it to get outside when he was about 1 1/2. (No, I still haven't fixed it.) Wasn't that just last week?

He had no reservations. He was ready to go!

Oh how excited to see that his bus is yellow like the big school buses! We thought it would be white or blue, so this was a fun last minute surprise.
When his bus driver opened the door, she said, "Hi Buddy! I'm Debbie, and I'm your bus driver! You can sit right here in this seat!" and he did. He didn't even look out the window to wave at us because he was busy talking to his new friend Luke, who lives around the corner from us and is in his new class.
Thank you Lord, for taking care of our Caeden and helping him with each small and gigantic step of his growing up.

See All Projects by TarynLeah