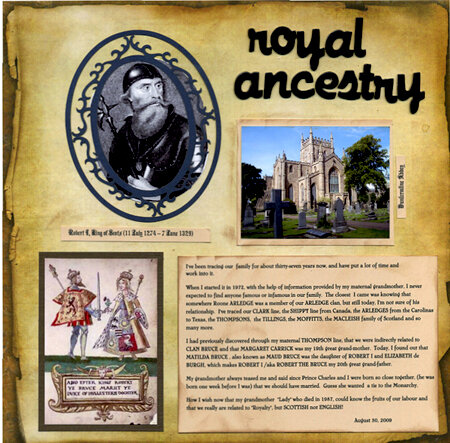 Scrapsoxmom
January 28, 2021
How exciting! And a lovely layout to tell your story.

I've been tracing our family for about thirty-seven years now, and have put a lot of time and
work into it.

When I started it in 1972, with the help of information provided by my maternal grandmother, I never expected to find anyone famous or infamous in our family. The closest I came was knowing that somewhere Roone ARLEDGE was a member of our ARLEDGE clan, but still today, I'm not sure of his relationship. I've traced our CLARK line, the SHIPPY line from Canada, the ARLEDGES from the Carolinas to Texas, the THOMPSONS, the TILLINGS, the MOFFITTS, the MACLEISH family of Scotland and so many more.
I had previously discovered through my maternal THOMPSON line, that we were indirectly related to CLAN BRUCE and that MARGARET CARRICK was my 19th great grand-mother. Today, I found out that MATILDA BRUCE , also known as MAUD BRUCE was the daughter of ROBERT I and ELIZABETH de BURGH, which makes ROBERT I /aka ROBERT THE BRUCE my 20th great grand-father.
My grandmother always teased me and said since Prince Charles and I were born so close together, (he was born one week before I was) that we should have married. Guess she wanted a tie to the Monarchy.
How I wish now that my grandmother "Lady" who died in 1987, could know the fruits of our labour and that we really are related to "Royalty", but SCOTTISH not ENGLISH!
August 30, 2009