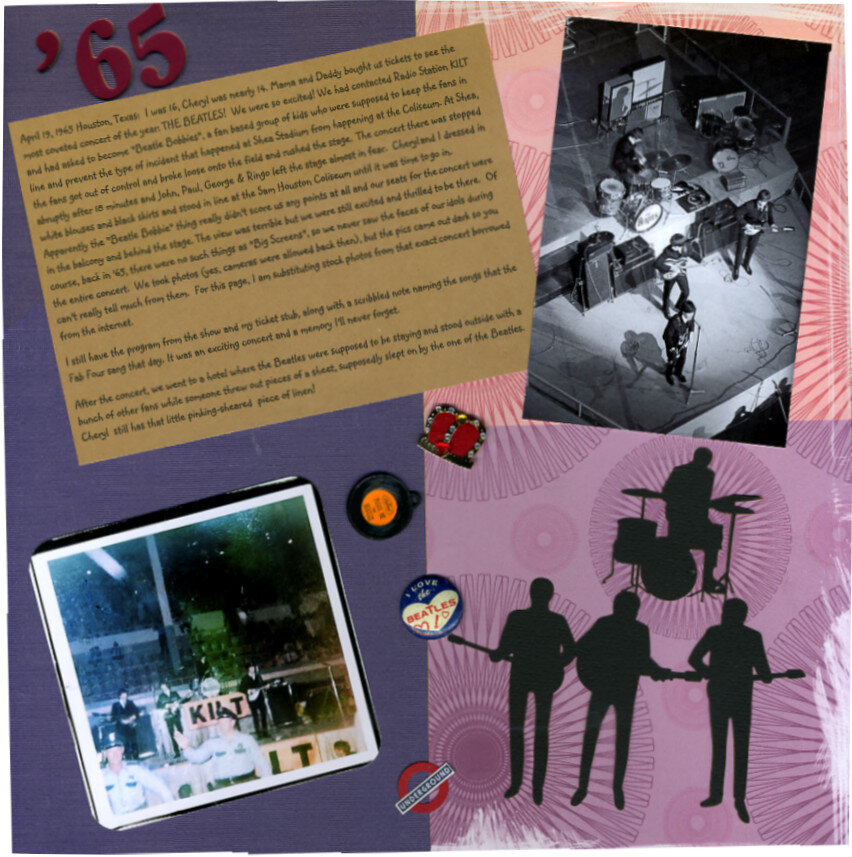 Give a Cheer
OK...should have read thi first! What a great memory!

April 19, 1965 Houston, Texas: I was 16, Cheryl was nearly 14. Mama and Daddy bought us tickets to see the most coveted concert of the year: THE BEATLES! We were so excited! We had contacted Radio Station KILT and had asked to become "Beatle Bobbies", a fan based group of kids who were supposed to keep the fans in line and prevent the type of incident that happened at Shea Stadium from happening at the Coliseum. At Shea, the fans got out of control and broke loose onto the field and rushed the stage. The concert there was stopped abruptly after 18 minutes and John, Paul, George & Ringo left the stage almost in fear. Cheryl and I dressed in white blouses and black skirts and stood in line at the Sam Houston Coliseum until it was time to go in. Apparently the "Beatle Bobbie" thing really didn't score us any points at all and our seats for the concert were in the balcony and behind the stage. The view was terrible but we were still excited and thrilled to be there. Of course, back in '65, there were no such things as "Big Screens", so we never saw the faces of our idols during the entire concert. We took photos (yes, cameras were allowed back then), but the pics came out dark so you can't really tell much from them. For this page, I am substituting stock photos from that exact concert borrowed from the internet.
I still have the program from the show and my ticket stub, along with a scribbled note naming the songs that the Fab Four sang that day. It was an exciting concert and a memory I'll never forget.
After the concert, we went to a hotel where the Beatles were supposed to be staying and stood outside with a bunch of other fans while someone threw out pieces of a sheet, supposedly slept on by the one of the Beatles. Cheryl still has that little pinking-sheared piece of linen!