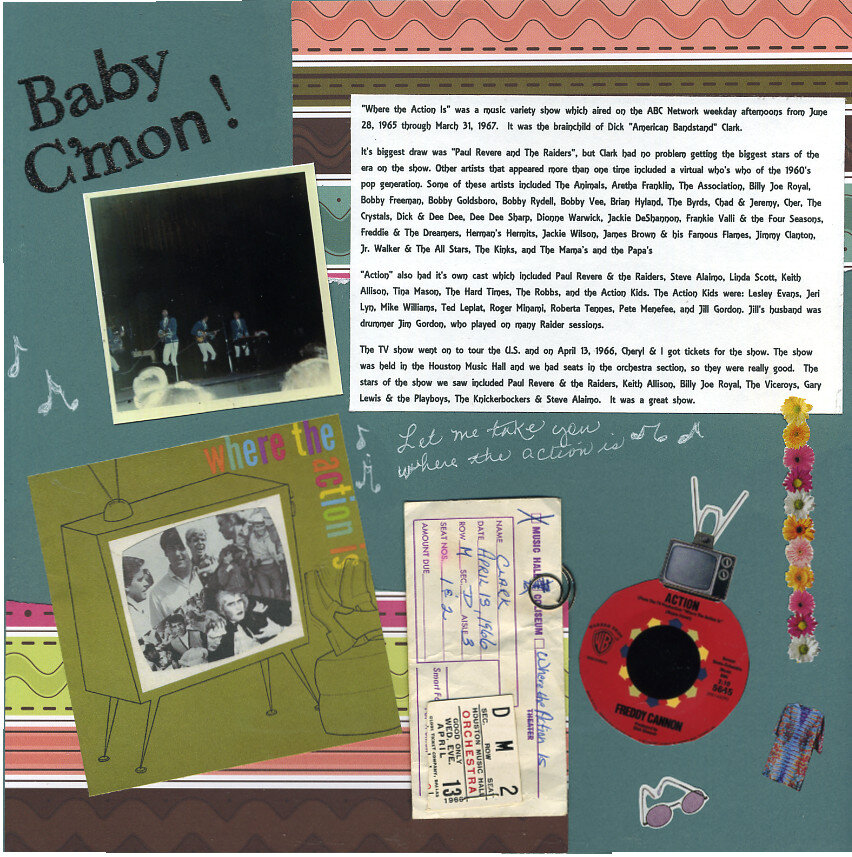 Give a Cheer
OMgosh - I remember watching that show after I got home from school in the afternoons. what a fun memory to scrap. love your lo.

Where the Action Is

"Where the Action Is" was a music variety show which aired on the ABC Network weekday afternoons from June 28, 1965 through March 31, 1967. It was the brainchild of Dick "American Bandstand" Clark.
It's biggest draw was "Paul Revere and The Raiders", but Clark had no problem getting the biggest stars of the era on the show. Other artists that appeared more than one time included a virtual who's who of the 1960's pop generation. Some of these artists included The Animals, Aretha Franklin, The Association, Billy Joe Royal, Bobby Freeman, Bobby Goldsboro, Bobby Rydell, Bobby Vee, Brian Hyland, The Byrds, Chad & Jeremy, Cher, The Crystals, Dick & Dee Dee, Dee Dee Sharp, Dionne Warwick, Jackie DeShannon, Frankie Valli & the Four Seasons, Freddie & The Dreamers, Hermans Hermits, Jackie Wilson, James Brown & his Famous Flames, Jimmy Clanton, Jr. Walker & The All Stars, The Kinks, and The Mamas and the Papa's
"Action" also had it's own cast which included Paul Revere & the Raiders, Steve Alaimo, Linda Scott, Keith Allison, Tina Mason, The Hard Times, The Robbs, and the Action Kids. The Action Kids were: Lesley Evans, Jeri Lyn, Mike Williams, Ted Leplat, Roger Minami, Roberta Tennes, Pete Menefee, and Jill Gordon. Jill's husband was drummer Jim Gordon, who played on many Raider sessions.
The TV show went on to tour the U.S. and on April 13, 1966, Cheryl & I got tickets for the show. The show was held in the Houston Music Hall and we had seats in the orchestra section, so they were really good. The stars of the show we saw included Paul Revere & the Raiders, Keith Allison, Billy Joe Royal, The Viceroys, Gary Lewis & the Playboys, The Knickerbockers & Steve Alaimo. It was a great show.