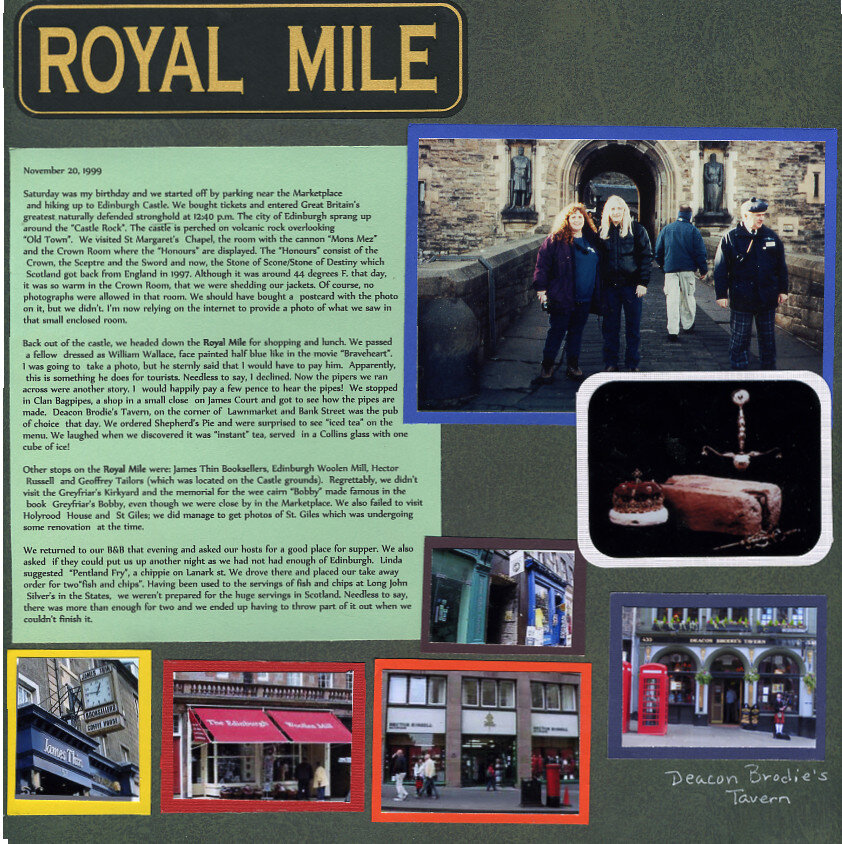 Saturday was my birthday and we started off by parking near the Marketplace
and hiking up to Edinburgh Castle. We bought tickets and entered Great Britains
greatest naturally defended stronghold at 12:40 p.m. The city of Edinburgh sprang up
around the Castle Rock. The castle is perched on volcanic rock overlooking
Old Town. We visited St Margarets Chapel, the room with the cannon Mons Mez
and the Crown Room where the Honours are displayed. The Honours consist of the
Crown, the Sceptre and the Sword and now, the Stone of Scone/Stone of Destiny which
Scotland got back from England in 1997. Although it was around 44 degrees F. that day,
it was so warm in the Crown Room, that we were shedding our jackets. Of course, no
photographs were allowed in that room. We should have bought a postcard with the photo
on it, but we didnt. Im now relying on the internet to provide a photo of what we saw in
that small enclosed room.

Back out of the castle, we headed down the Royal Mile for shopping and lunch. We passed
a fellow dressed as William Wallace, face painted half blue like in the movie Braveheart.
I was going to take a photo, but he sternly said that I would have to pay him. Apparently,
this is something he does for tourists. Needless to say, I declined. Now the pipers we ran
across were another story. I would happily pay a few pence to hear the pipes! We stopped
in Clan Bagpipes, a shop in a small close on James Court and got to see how the pipes are
made. Deacon Brodies Tavern, on the corner of Lawnmarket and Bank Street was the pub
of choice that day. We ordered Shepherds Pie and were surprised to see iced tea on the
menu. We laughed when we discovered it was instant tea, served in a Collins glass with one
cube of ice!

Other stops on the Royal Mile were: James Thin Booksellers, Edinburgh Woolen Mill, Hector
Russell and Geoffrey Tailors (which was located on the Castle grounds). Regrettably, we didnt
visit the Greyfriars Kirkyard and the memorial for the wee cairn Bobby made famous in the
book Greyfriars Bobby, even though we were close by in the Marketplace. We also failed to visit
Holyrood House and St Giles; we did manage to get photos of St. Giles which was undergoing
some renovation at the time.

We returned to our B&B that evening and asked our hosts for a good place for supper. We also
asked if they could put us up another night as we had not had enough of Edinburgh. Linda
suggested Pentland Fry, a chippie on Lanark St. We drove there and placed our take away
order for twofish and chips. Having been used to the servings of fish and chips at Long John
Silvers in the States, we werent prepared for the huge servings in Scotland. Needless to say,
there was more than enough for two and we ended up having to throw part of it out when we
couldnt finish it.