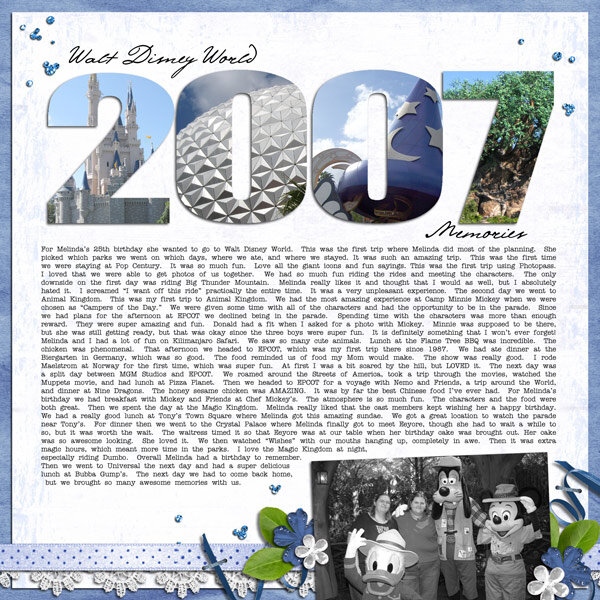 Give a Cheer
Awesome layout!.. Love the big 2007 filled with pictures. I have to try that technique.

ScrapitDigi
November 08, 2010
What a great idea to use the big numbers like that--hope you will comsider it a compliment if I lift this page.

Sugarfoot411
November 07, 2010
I love the pics in the number. And the centre stage for the journaling. Great page!

Rahmanti
December 27, 2009
This image was printed from:

Journaling says:
For Melindas 25th birthday she wanted to go to Walt Disney World. This was the first trip where Melinda did most of the planning. She picked which parks we went on which days, where we ate, and where we stayed. It was such an amazing trip. This was the first time we were staying at Pop Century. It was so much fun. Love all the giant icons and fun sayings. This was the first trip using Photopass. I loved that we were able to get photos of us together. We had so much fun riding the rides and meeting the characters. The only downside on the first day was riding Big Thunder Mountain. Melinda really likes it and thought that I would as well, but I absolutely hated it. I screamed I want off this ride practically the entire time. It was a very unpleasant experience. The second day we went to Animal Kingdom. This was my first trip to Animal Kingdom. We had the most amazing experience at Camp Minnie Mickey when we were chosen as Campers of the Day. We were given some time with all of the characters and had the opportunity to be in the parade. Since we had plans for the afternoon at EPCOT we declined being in the parade. Spending time with the characters was more than enough reward. They were super amazing and fun. Donald had a fit when I asked for a photo with Mickey. Minnie was supposed to be there, but she was still getting ready, but that was okay since the three boys were super fun. It is definitely something that I wont ever forget! Melinda and I had a lot of fun on Kilimanjaro Safari. We saw so many cute animals. Lunch at the Flame Tree BBQ was incredible. The chicken was phenomenal. That afternoon we headed to EPCOT, which was my first trip there since 1987. We had ate dinner at the Biergarten in Germany, which was so good. The food reminded us of food my Mom would make. The show was really good. I rode Maelstrom at Norway for the first time, which was super fun. At first I was a bit scared by the hill, but LOVED it. The next day was a split day between MGM Studios and EPCOT. We roamed around the Streets of America, took a trip through the movies, watched the Muppets movie, and had lunch at Pizza Planet. Then we headed to EPCOT for a voyage with Nemo and Friends, a trip around the World, and dinner at Nine Dragons. The honey sesame chicken was AMAZING. It was by far the best Chinese food Ive ever had. For Melindas birthday we had breakfast with Mickey and Friends at Chef Mickeys. The atmosphere is so much fun. The characters and the food were both great. Then we spent the day at the Magic Kingdom. Melinda really liked that the cast members kept wishing her a happy birthday. We had a really good lunch at Tonys Town Square where Melinda got this amazing sundae. We got a great location to watch the parade near Tonys. For dinner then we went to the Crystal Palace where Melinda finally got to meet Eeyore, though she had to wait a while to so, but it was worth the wait. The waitress timed it so that Eeyore was at our table when her birthday cake was brought out. Her cake was so awesome looking. She loved it. We then watched Wishes with our mouths hanging up, completely in awe. Then it was extra magic hours, which meant more time in the parks. I love the Magic Kingdom at night, especially riding Dumbo. Overall Melinda had a birthday to remember. Then we went to Universal the next day and had a super delicious lunch at Bubba Gumps. The next day we had to come back home, but we brought so many awesome memories with us.

See All Projects by Yzerbear19