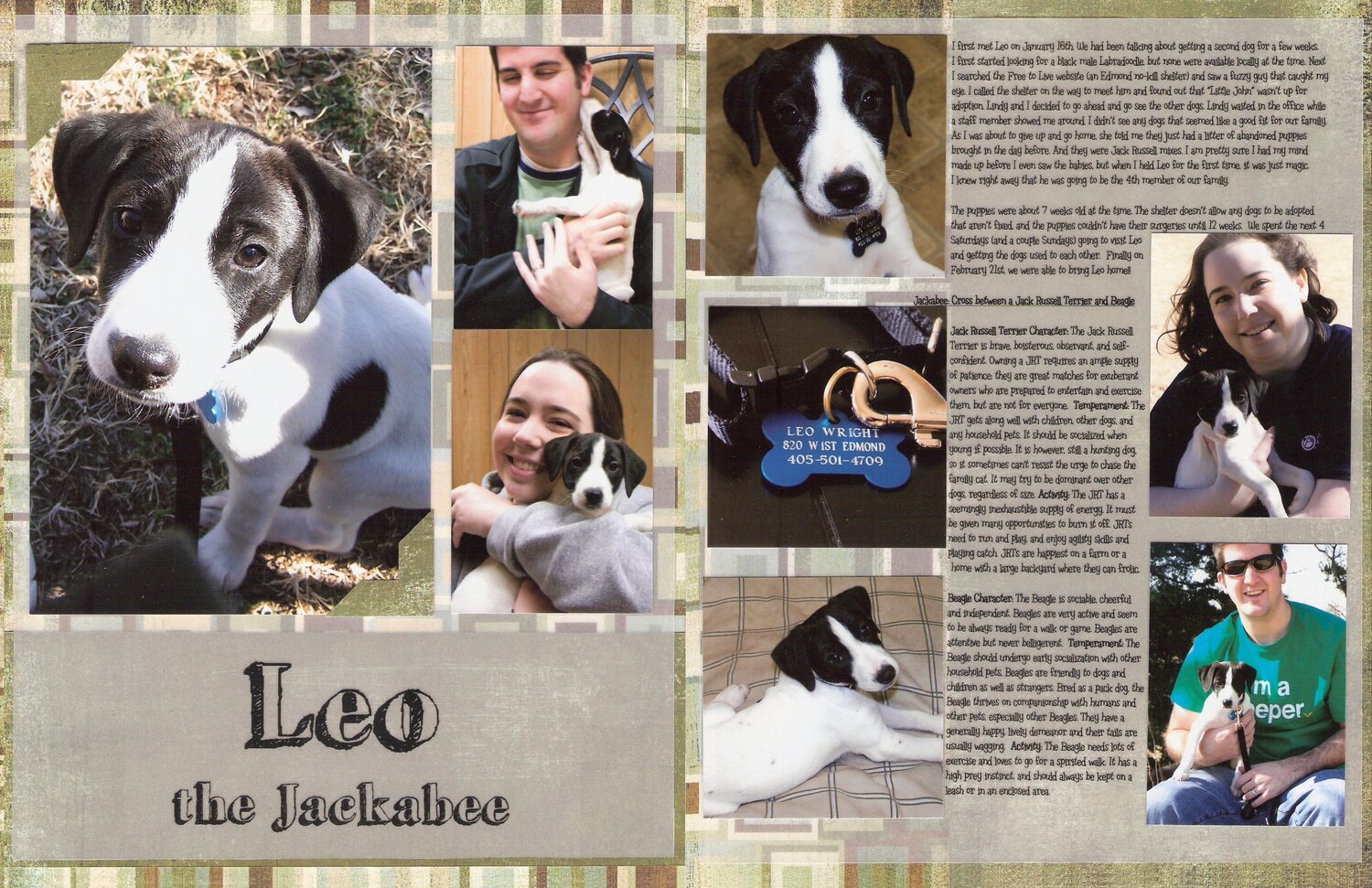 Give a Cheer
oh gorgeous!!

Ozzyvik
February 01, 2010
I can totally understand why you picked him, he's so cute!

Journaling:
I first met Leo on January 16th. We had been talking about getting a second dog for a few weeks. I first started looking for a black male Labradoodle, but none were available locally at the time. Next I searched the Free to Live website (an Edmond no-kill shelter) and saw a fuzzy guy that caught my eye. I called the shelter on the way to meet him and found out that Little John wasn't up for adoption. Lindy and I decided to go ahead and go see the other dogs. Lindy waited in the office while a staff member showed me around. I didn't see any dogs that seemed like a good fit for our family. As I was about to give up and go home, she told me they just had a litter of abandoned puppies brought in the day before. And they were Jack Russell mixes. I am pretty sure I had my mind made up before I even saw the babies, but when I held Leo for the first time, it was just magic. I knew right away that he was going to be the 4th member of our family. The puppies were about 7 weeks old at the time. The shelter doesn't allow any dogs to be adopted that aren't fixed, and the puppies couldn't have their surgeries until 12 weeks. We spent the next 4 Saturdays (and a couple Sundays) going to visit Leo and getting the dogs used to each other. Finally on February 21st, we were able to bring Leo home!!

Jackabee: Cross between a Jack Russell Terrier and Beagle

Jack Russell Terrier Character: The Jack Russell Terrier is brave, boisterous, observant, and self-confident. Owning a JRT requires an ample supply of patience; they are great matches for exuberant owners who are prepared to entertain and exercise them, but are not for everyone. Temperament: The JRT gets along well with children, other dogs, and any household pets. It should be socialized when young if possible. It is however, still a hunting dog, so it sometimes can't resist the urge to chase the family cat. It may try to be dominant over other dogs, regardless of size. Activity: The JRT has a seemingly inexhaustible supply of energy. It must be given many opportunities to burn it off. JRTs need to run and play, and enjoy agility skills and playing catch. JRTs are happiest on a farm or a home with a large backyard where they can frolic.

Beagle Character: The Beagle is sociable, cheerful and independent. Beagles are very active and seem to be always ready for a walk or game. Beagles are attentive but never belligerent. Temperament: The Beagle should undergo early socialization with other household pets, Beagles are friendly to dogs and children as well as strangers. Bred as a pack dog, the Beagle thrives on companionship with humans and other pets, especially other Beagles. They have a generally happy, lively demeanor and their tails are usually wagging. Activity: The Beagle needs lots of exercise and loves to go for a spirited walk. It has a high prey instinct, and should always be kept on a leash or in an enclosed area.

See All Projects by TashaRock