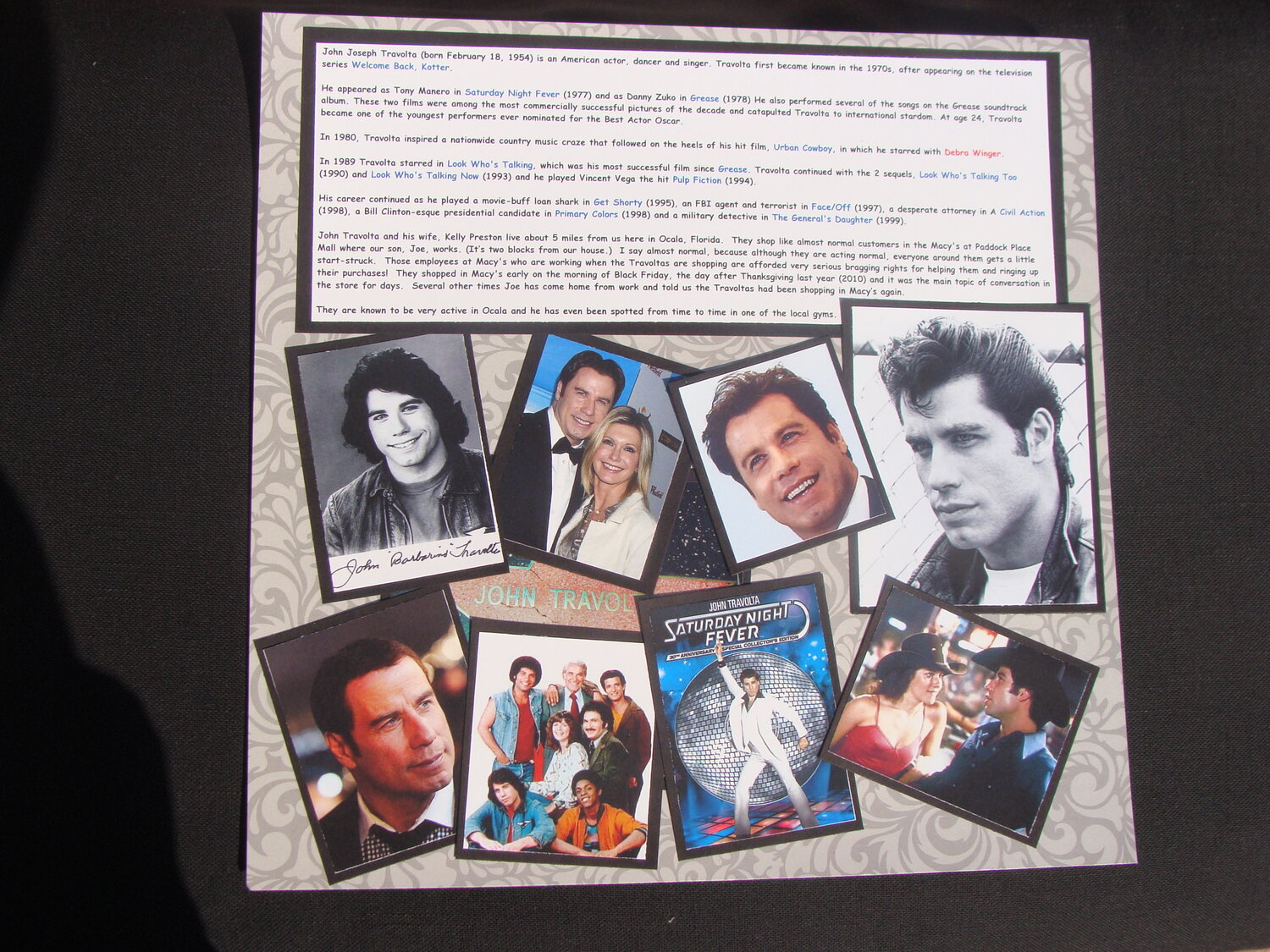 Give a Cheer
Wow, that's a great research! Wonderful tribute.

Melissa U
July 18, 2011
I did not know any of that about the airplanes other than that he's a pilot. He really has had an interesting career as an actor.

DaisyButton
July 15, 2011
This image was printed from:

John Joseph Travolta (born February 18, 1954) is an American actor, dancer and singer. Travolta first became known in the 1970s, after appearing on the television series Welcome Back, Kotter.

He appeared as Tony Manero in Saturday Night Fever (1977) and as Danny Zuko in Grease (1978) He also performed several of the songs on the Grease soundtrack album. These two films were among the most commercially successful pictures of the decade and catapulted Travolta to international stardom. At age 24, Travolta became one of the youngest performers ever nominated for the Best Actor Oscar.

In 1980, Travolta inspired a nationwide country music craze that followed on the heels of his hit film, Urban Cowboy, in which he starred with Debra Winger.

His career continued as he played a movie-buff loan shark in Get Shorty (1995), an FBI agent and terrorist in Face/Off (1997), a desperate attorney in A Civil Action (1998), a Bill Clinton-esque presidential candidate in Primary Colors (1998) and a military detective in The General's Daughter (1999).

John Travolta and his wife, Kelly Preston live about 5 miles from us here in Ocala, Florida. They shop like almost normal customers in the Macy's at Paddock Place Mall where our son, Joe, works. (It's two blocks from our house.) I say almost normal, because although they are acting normal, everyone around them gets a little start-struck. Those employees at Macy's who are working when the Travoltas are shopping are afforded very serious bragging rights for helping them and ringing up their purchases! They shopped in Macy's early on the morning of Black Friday, the day after Thanksgiving last year (2010) and it was the main topic of conversation in the store for days. Several other times Joe has come home from work and told us the Travoltas had been shopping in Macy's again.

They are known to be very active in Ocala and he has even been spotted from time to time in one of the local gyms.


The Travoltas live in a home (mansion) in a gated community with a private airstrip in the middle for use by the residents of the community. His home has attached hangers for two of his planes; the lear jet and the retired commercial Quantas Airline plane which still has the kangaroo on the tail. Commercial flights use the Orlando or Tampa airports and our home is not on under a flight pattern for either of those airports. Therefore when we hear or see a plane go over our house, we know it is most likely John Travolta flying over our house.

Because his home/landing strip is so close, it doesn't matter if he is taking off or landing, the plane is low enough that we can see the kangaroo on the tail and we know for sure that it is the Travoltas. When we see the plane ascending we always say, Wonder where John's going? and when we see it descending to land we always say, "John's home - wonder where he's been?"

According to the Federal Aviation Administration pilot database, Travolta is qualified in several types of single and multi-engine aircraft, and has the highest pilot medical certification possible. We know that Travolta is an accomplished pilot. A lot of people fly for the pleasure of it, and he's one of them, said John Clabes, an FAA spokesman. If you have this many ratings on these types of high-performance aircraft, you're obviously a good pilot.

In layman's terms, Travolta has enough experience flying large multi-engine jets that he could easily switch to piloting commercial airliners for a living.

Travolta owns at least five aircraft, including an ex-Australian Boeing 707138 airliner. The 707 aircraft bears the marks of Qantas, as Travolta acts as an official goodwill ambassador for the airline wherever he flies. He has a multi-million dollar estate in the Jumbolair subdivision in Ocala, Florida; Jumbolair is a luxury fly-in residential subdivision with the longest private airstrip in the country. It has a 7,550-foot runway.

The very layout of his new house is testament to Travolta's love of flying. It's located immediately off the main airstrip, and is designed so his jets can taxi right up to two outbuildings connected to the main house structure, which is shaped like a squat air-control tower. Travolta literally can walk out his door, under a canopied walkway and into the cockpit, open the long mechanized gate and be airborne in a matter of minutes.

According to CNN, John Travolta, is considered an extremist even among aviation buffs. He's the only private citizen in the U.S. to own and operate a Boeing 707, a former commercial airliner. He employs a cockpit crew of six, who along with Travolta, wear navy-blue uniforms and jaunty white caps.

"He uses the 707 as the family van," says Jumbolair developer Terri Jones. "The Gulfstream is his sports car."