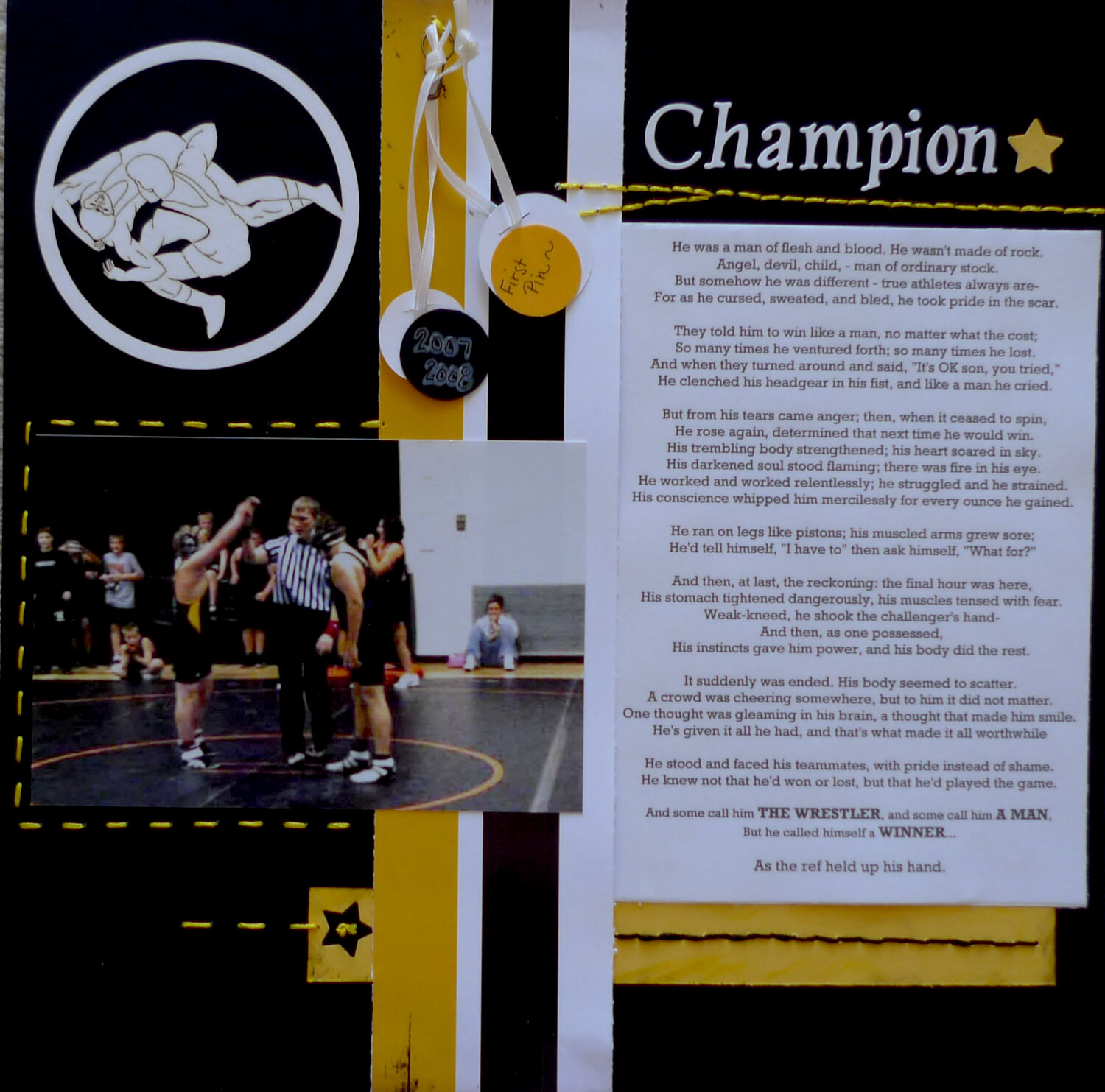 Give a Cheer
Great layout and poem...love the design and colors and love seeing your pride in him shine through.

Dollscrap
September 14, 2011
Great LO. I love the colors and the stitching.

Bubblegirl
September 07, 2011
That is a great poem! I love your stitching it realy adds to the page. Plus I'm partial to black and gold!

Alwayschar
September 07, 2011
Very cool!! Love the poem - what a great addition to a great page!

Senora_x
September 05, 2011
the letters look great on this, awesome poem!

Lindaj3
September 04, 2011
great page- the stitching really adds a lot to it

Mammasol
September 04, 2011
This image was printed from:

He was a man of flesh and blood. He wasn't made of rock.
Angle, devil, child, ~ man of ordinary stock.
But somehow he was different ~ true athletes always are-
For as he cursed, sweated, and bled, he took pride in the scar.

They told him to win like a man, no matter what the cost;
So many times he ventured forth; so many times he lost.
And when they turned around and said, "It's OK son, you tried,"
He clenched his headgear in his fist, and like a man he cried.

But from his tears came anger; then, when it ceased to spin,
He rose again, determined that next time he would win,
His darkened soul stood flaiming; there was fire in his eye.
He worked and worked relentlessly; he struggled and he strained.
His conscience whipped him mercilessly for every ounce he gained.

He ran on legs like pistons; hhis muscled arms grew sore;
He's tell himself, "I have to" then ask himself, "What for?"

And then, at last, the reckoning: the final hour was here,
His stomach tightened dangerouslyu, his muscles tenses with fear.
Weak-kneed, he shook the challenger's hand-
And then, as one possessed,
His instincts gave him power, and his body did the rest.

It suddenly was ended. His body seemed to scatter.
A croud was cheering somewhere, but to him it did not matter.
One thought was gleaming in his brain, a thought that made him smile.
He's given it all he had, and that's what made it all worthwhile

He stood and faced his teammates, with pride instead of shame.
He knew not that he'd won or lost, but that he'd played the game.

As the ref held up his hand

My son started wrestling in 7th grade at the request of one of his teachers. He wasn't sure about it and it took some time for him to get his first pin and he was a little frustrated. This moment was a very special moment. I was very proud of him!!

This is Sketch #4 in the Page Maps #31 Challege. The white letters were from my SS Tina ~ TFL

See All Projects by Lynnde