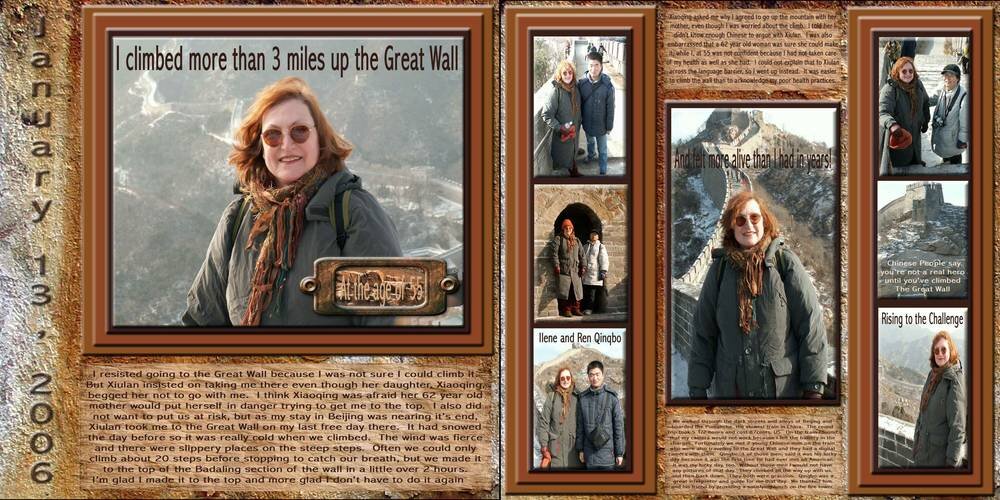 Give a Cheer
What a blessing that you were able to get pictures of this, even without a camera of your own! I like that you label individual photos to identify people and places. My only idea for a critique would be: I would consider using only single mats for the 2 strips of pics on the second page, as is looks slightly heavier to me than the first. This is yet another lovely layout! :)

Elleanne
November 01, 2006
I love your pictures esp that focal point! Your story is interesting to read and indeed, a trip to Beijing won't be complete without a visit to the famous Great wall! You were certainly lucky that the Chinese men were gracious enough to send you these lovely pics! TFS!

All Things Shabby
August 26, 2006
The satisfaction of your successful climb is written all over your face. If every you are published this should be the picture of the 'author' that always appears on the back flap.

I climbed more than three miles up the Great Wall at the age of 55, and felt more alive than I had in years.

I resisted going to the Great Wall because I was not sure I could climb it.
But Xiulan insisted on taking me there even though her daughter, Xiaoqing, begged her not to go with me.
I think Xiaoqing was afraid her 62 year old
mother would put herself in danger trying to get me to the top.
I also did not want to put us at risk, but as my stay in Beijing was nearing it's end, Xiulan took me to the Great Wall on my last free day there.
It had snowed the day before so it was really cold when we climbed.
The wind was fierce and there were slippery places on the steep steps.
Often we could only climb about 20 steps before stopping to catch our breath, but we made it
to the top of the Badaling section of the wall in a little over 2 hours.
I'm glad I made it to the top and more glad I don't have to do it again.

Xiaoqing asked me why I agreed to go up the mountain with her mother, even though I was worried about the climb.
I told her I didn't know enough Chinese to argue with Xiulan.
I was also embarrassed that a 62 year old woman was sure she could make it, while I, at 55 was not confident because I had not taken care of my health as well as she had.
I could not explain that to Xiulan across the language barrier, so I went up instead.
It was easier to climb the wall than to acknowledge my poor health practices.

We walked through the dark streets and alleys of Beijing and boarded the Pumanche, the slowest train in China.
The round trip took 5 1/2 hours and cost 87cents, US. On the train I found that my camera would not work because I left the battery in the
charger.
Fortunately we met 2 young Chinese men on the train who were also traveling to the Great Wall and they had a digital camera with them.
Qingbo, 1 of those men, said it was his lucky
day because it was the first time he had ever met an American.

It was my lucky day, too. Without those men I would not have any pictures of that day.
They climbed all the way up with us, and then back down. They both were gracious.
Qingbo was a great interpreter and guide for me that day.
We thanked him and his friend by providing a satisfying lunch on the fire tower.

More Projects by Truth And Wisdom

See All Projects by Truth And Wisdom