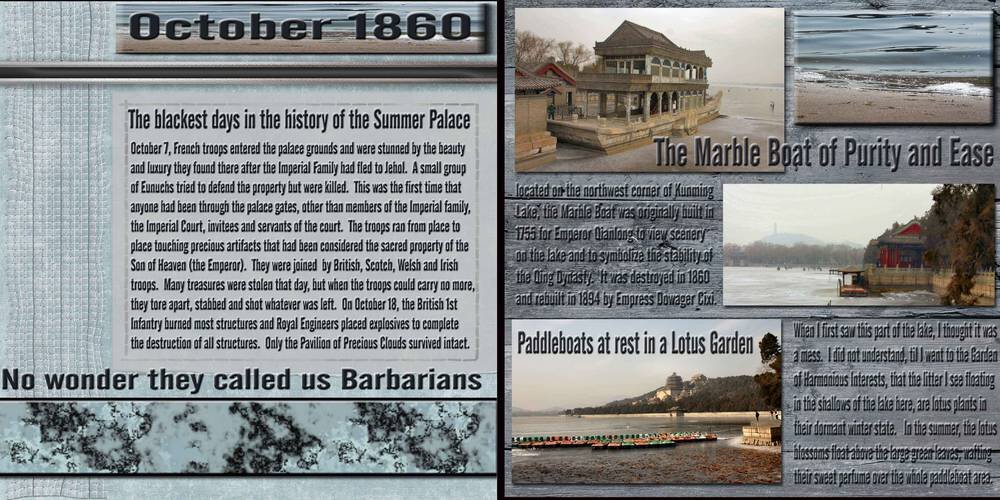 Give a Cheer
What a wonderful history lesson! It seems to me that right page is lighter than the left. I would consider replacing the strip of marble paper on the bottom left with a strip of the darker paper on the right. I would also use the dark paper to make an arrow or 3 shapes which I would place horizontally on the empty blue space in the top left corner of the left page, pointing to the title date. Then I would also insert a rectangle of the darker paper into the empty space on the left page between the horizontal line and &quot;no wonder.&quot; If there was some empty space on the right page I would not suggest this, but I think it might balance things better. These are just my ideas. This is fine as is. :) Very interesting reading.

October 7, French troops entered the palace rounds and were stunned by the beauty and luxury they found there after the Imperial Family had fled to Jehol. A small group of Eunuchs tried to defend the property but were killed. This was the first time that anyone had been through the palace gates, other than members of the Imperial family, the Imperial Court, invitees and servants of the court. The troops ran from place to place touching precious artifacts that had been considered the sacred property of the Son of Heaven (the Emperor). They were joined by British, Scotch, Welsh and Irish troops. Many treasures were stolen that day, but when the troops could carry no more, they tore apart, stabbed and shot whatever was left. On October 18, the British 1st Infantry burned most structures and Royal Engineers placed explosives to complete the destruction of all structures. Only the Pavilion of Precious Clouds survived intact.

No wonder they called us Barbarians

The Marble Boat of Purity and Ease

Located on the northwest corner of Kunming Lake, the Marble Boat was originally built in 1755 for Emperor Qianlong to view scenery on the lake and to symbolize the stability of the Qing Dynasty. It was destroyed in 1860 and rebuilt in 1894 by Empress Dowager Cixi.

When I first saw this part of the lake, I thought it was a mess. I did not understand, til I went to the Garden of Harmonious Interests, that the litter I see floating in the shallows of the lake here, are lotus plants in their dormant winter state. In the summer, the lotus blossoms float above the large green leaves, wafting their sweet perfume over the whole paddleboat area.

More Projects by Truth And Wisdom

See All Projects by Truth And Wisdom