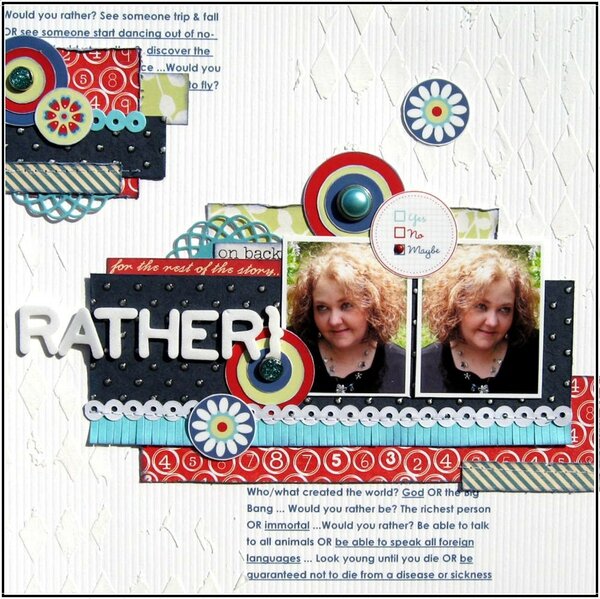 Savvy Scrapper Amie
March 18, 2017
This image was printed from:

I made this for CSI: Color, Stories, Inspiration [csicolorstoriesinspiration.ning.com], using Em Stafrace's sketch as inspiration for my page design. I used lots of oldies from my stash on this page.My journaling is based on a âWould You Rather?â quiz, and I put my answers on the front, but journaled in more detail on the back of my page. My journaling reads:Here's what my journaling on the back says The questions came from this site, which was one of the Testimony prompts in the Case File: I would definitely rather see someone start dancing out of nowhereâthat would just crack me up and make me smile big. Besides, I've tripped and fallen before, and I don't find that amusing, even though a whole cafeteria of students once thought it was quite entertaining when I slipped on a tater tot and fell on my face!I would rather discover the whole world than go to outer space. It would be awesome to explore outer space and go âwhere no man has gone before,â but it might get old after a while. I know I can't go to so many places because of the atmospheres, and after a while, planets and stars from a safe distance would probably start looking alike. Earth is such a marvelous, gorgeous gift to humans, and to be able to explore the whole would would be a dream.For superpowers, I chose the ability to read minds and fly over invisibility and teleportation, but in retrospect, I meant to underline the reverse. I think it would be so cool to be able to instantly teleport myself anywhere. Think of the time I'd save commuting to school. I could visit Tracee in an instant. I could pop over to a friend's house for a cup of tea and then back home. I could go kiss Mom and Gram goodnight and then be back in time for bed in a flash. I could have lunch with Farzad and be back to school instantly.I am not religious, but I cannot imagine that this amazing planet and universe just started as a bang out of nowhere, so I have to believe it was created by God. People always say they wouldn't want to live forever because all their friends and family would die off and they would keep going, but I think you'd make more friends. There are so many amazing things in this world and so many people to meet and so many things to learn that I think I'd never get bored or tired of living. Being the richest person would be awesome, but I think living forever would make you even richer.I would rather be able to speak all foreign languages than be able to talk to animals. When I first read the question, my impulse was to say talk to animals. I'd love to know what my cats are thinking. But then I got to thinkingâ¦part of the magic of animals is that their thoughts are a mystery to us.Although it would be fabulous to look young until I die, I have seen first-hand the torment and anguish of being sick, so that question was a no-brainer.TFL! ~Debbi T

See All Projects by Debbi Tehrani