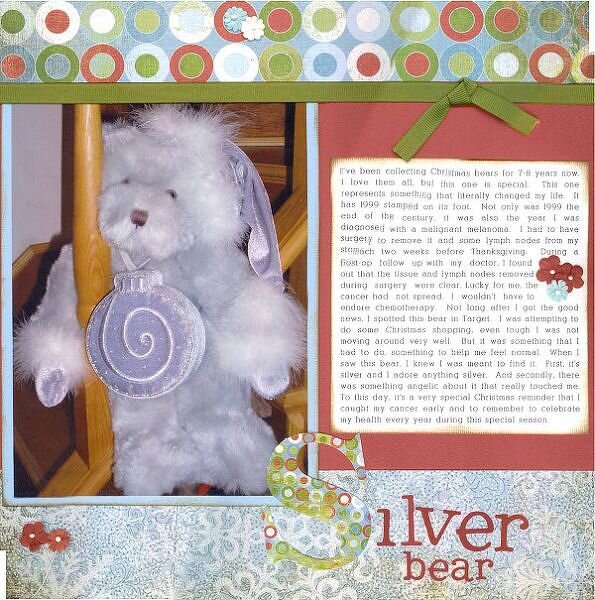 A few weeks ago, Karen Carter posted a question in the pub - what's your favorite Christmas ornament or decoration? I posted this bear and it made me realize there was a story there. I was inspired to create a page about it. Looks like the journaling is a little blurry, so here it is: âI've been collecting Christmas bears for 7-8 years now. I love them all, but this one is special. This one represents something that literally changed my life. It has 1999 stamped on its foot. Not only was 1999 the end of the century, it was also the year I was diagnosed with a malignant melanoma. I had to have surgery to remove it (my melanoma was on my leg) and some lymph nodes from my stomach two weeks before Thanksgiving. During a post-op follow up with my doctor, I found out that the tissue and lymph nodes removed during surgery were clear. Lucky for me, the cancer had not spread. I wouldn't have to endure chemotherapy. Not long after I got the good news, I spotted this bear in Target. I was attempting to do some Christmas shopping, even tough I was not moving around very well. But it was something that I had to do, something to help me feel normal. When I saw this bear, I knew I was meant to find it. First, it's silver and I adore anything silver. And secondly, there was something angelic about it that really touched me. To this day, it's a very special Christmas reminder that I caught my cancer early and to remember to celebrate my health every year during this special season.âTFL! *ETA* I forgot to mention that this was inspired by a Becky Fleck sketch.

See All Projects by Tammyd119