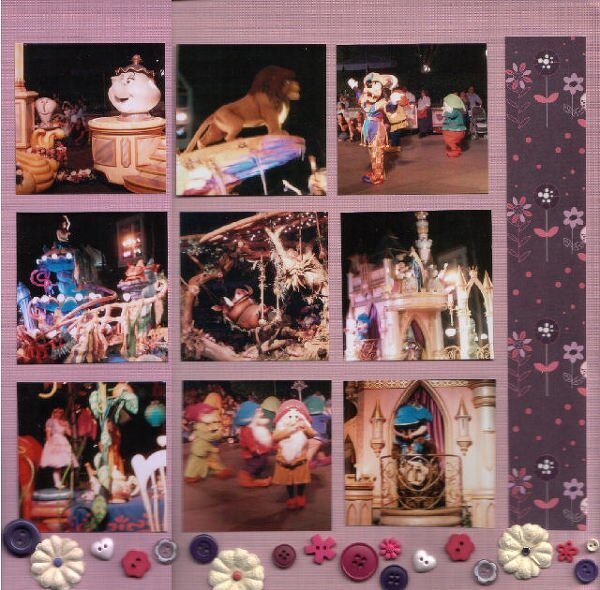 Some shots and details from The Parade of Dreams at Disneyland. This is for the Jump Start January Challenge and was lifted from Michelle StClair's layout âBest of 2007â My journaling reads: Introduction: Once upon a time, a marvelous dreamer found the power to transform wishes into reality, and with just a sprinkle of pixie dust, a magical kingdom came alive for dreamers of all ages to enjoy. Soon the young at heart gathered from around the world, following their dreams to the place where anything is possible. The magic place where dreams come true. Walt Disney's Parade of Dreams is dedicated to children of all ages, and to that special dream that first began when Walt Disney proclaimed âTo all who come to this happy place, welcome.â Gateway to Dreams: Peter Pan and Wendy are inside a golden train with Tinkerbell sitting on top of it with the Main Street train station as the backdrop of the unit. The Fairy Godmother of Cinderella, the Blue Fairy from Pinocchio and Flora, Fauna &amp; Merryweather from Sleeping Beauty dance around this unit. Dream of Enchantment: Themed to the ballroom from Beauty and the Beast, Belle and Beast dance and an Audio-Animatronic Lumiere sings. Cogsworth, Mrs. Potts, and Chip entertain the crowd as well while spoons, forks, knives, salt &amp; pepper shakers, and plate dancers perform around the unit. This was Jerry Orbach's last time supplying the voice of Lumiere. Orbach died in December 2004 after he recorded the dialogue for the parade. Dream of Laughter: Pinocchio and toys from Gepetto's workshop dance around a giant Gepetto who is controlling the Can-Can and in the background music playing âAn actors life for meâ and Dutch dancing puppets from the movie. Hanging behind the unit are Russian Puppets on bungee cords. Other characters include Foulfellow, Gideon, Jiminy Cricket sitting atop a toy block and Cleo swimming around in her fish bowl. Dream of Another World: Ariel sits on top of a giant fountain made of clam shells, with Part of Your World and Under the Sea playing in the background. Bubbles float around Ariel. This unit also features Audio-Animatronics Sebastian and Flounder. Before the unit are dancers decorated like stylized waves, blue and white pearl dancers, and light-colored âfish kitesâ. A giant Ursula puppet makes potions and cackles to âPoor Unfortunate Soulsâ while Flotsam and Jetsam lurk around. Black Pearl dancers perform for the audience as well. Dream of Imagination: A Giant Trampoline disguised as a tea table themed to Alice in Wonderland's Mad Tea Party, carrying a live-action Mad Hatter and Alice. A giant animatronic Caterpillar sits on the back of the unit atop a mushroom. The Queen of Hearts and White Rabbit entertain the crowd, while Tweedle Dee and Dum are pushing stylized tea cups. Dream of Adventure: Simba atop Pride Rock from The Lion King with Zazu, Pumba sleeping in a hammock, a live-action Timon, Rafiki and Nala. Various costumed animal dancers surround the unit, such as a tiger, panther, antelope, chimpanzee, cheetah, leopard, and a life sized rhinoceros along with walking stilt performers dressed as a stylized zebra and giraffe. On the back of the unit are two Bird performers. Dreams Come True: Lastly, Mickey and Minnie as King and Queen on Sleeping Beauty Castle with other Disney royalty, including Princess Aurora, Snow White, and Cinderella. Attendants Chip ânâ Dale, Goofy, Pluto, and Donald also perform on and around this unit along with the Seven Dwarfs entertain the guests.

See All Projects by Pam9363