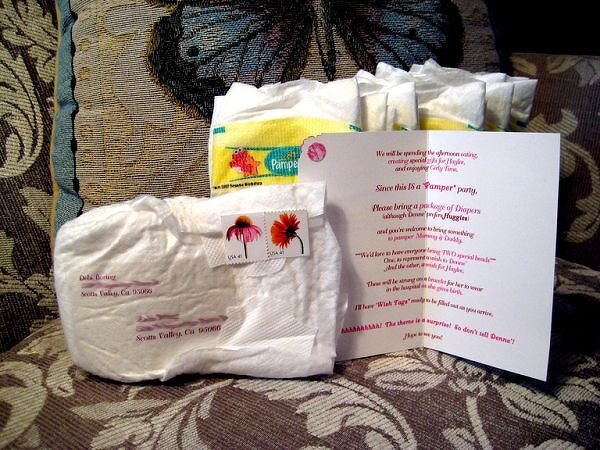 Thought I'd share a Baby Shower invitation, that started out as a joke, but turned into kind of a funny invitation. DIL is having another baby, and it's another girl, so she already has a lot of girly stuff, so I thought I'd throw her a âPooper Partyâ and everyone bring a package of diapers. I decided to try using newborn diapers as the invitations, and bought some tiny Pampers. Then I had a brain burp and thought it would be fun to throw a âPamper the Mommyâ shower. Soâ¦ THe diapers have an invitation inside with all the info, and then I just used transparencies with the âYou're Invitedâ on the front and the mailing addresses on the back. I took them to the PO and they actually mailed them with no envelopes! Soâ¦ Everyone wound up getting an actual diaper in their mailbox! I thought it would be fun to melt a little chocolate (or shlocklate as my grandaughter says &lt;g&gt;) inside each diaper, but at the last minute scratched it cuz I didn't want to take a chance that the PO wouldn't mail them. Anywayâ¦Everyone got a kick out of receiving a diaper in the mail. BTWâ¦ Did you know that you can send pretty much anything through the mail? I've sent blown up Beach Balls, Whoopy Cushions, even a Rubber Chicken to my friend for his birthday~! That was pretty funny cuz he said when he went to his mailbox, all he saw was the chicken feet sticking out and thought it was REAL LOL! heheheâ¦ Fun timesâ¦

See All Projects by Debiboring