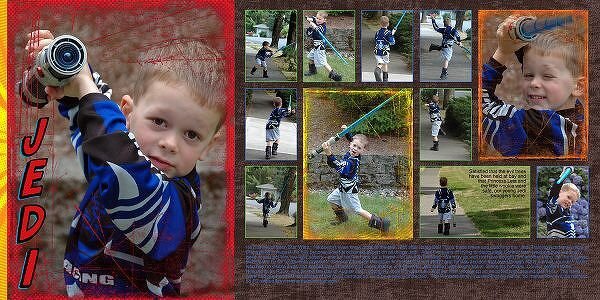 For the layout a day challenge. Bright papers and title letters are from the Scrapgirls Action Hero kit. Scratched frames also Scrapgirls. Background black paper is by Lindsay Johnson from her Celebrate freebie kit.Journaling: He has never seen Star Wars. He doesnât even know most of the plot. But after riding Star Tours three times and watching the âJedi Training Acedemyâ show at Disneyland in August, he has become a self-proclaimed expert on all things Jedi. After two years of trying to discourage Connor from weapon-play, we finally gave in and got him two light sabers - one for him and one for a friend - for his fifth birthday. We may as well not have bought him another thing, for the futuristic swords are by far his favorite presents. Connorâs favorite character from Star Tours is R2D2 and he has decided that even though R2 is a small, roundish robot, who has no visible arms and speaks only in beeps and clicks that he is a powerful Jedi skilled with a light saber. Since his birthday, Connor prefers to be referred to as R2D2, and on this 6th day of August 2007, young R2 took Princess Leia and our little wookie on an escorted walk around Oak Hills. The trees were bad guys and R2 ran ahead of the royal carriage so weâd be properly protected. The Princess firmly insisted that no plants, no matter how evil, be harmed, so R2 settled for warning them menacingly.

See All Projects by Aerobigirl