Sign In
Gallery ⁄ Search: easy to make in mass 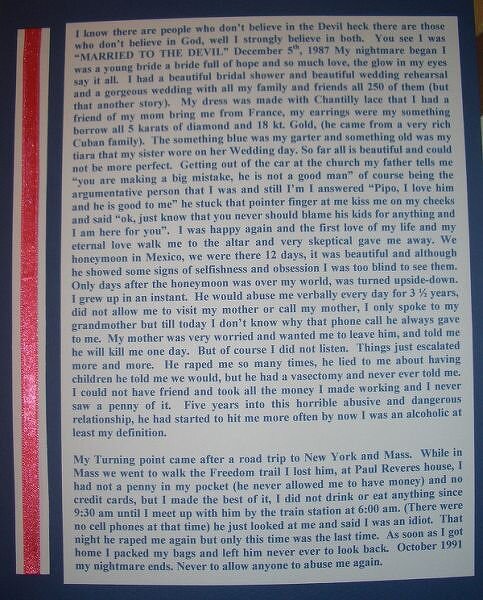 Inspired by Jan 5/6 okâ¦I gave this a lot of thought, this is very personal but I have spoke to many batter womans and know a few myself. Is not an easy sittuation for anyone involved, but my family and the love my parents and grandparent gave me, help me through it, but only I could get out of it.â¦This however, made me a better person and made me who I am today, and I like that. I wrote this more than anything as therapy for me even 20 years later sometimes it hunts me. I don't want my daughter to ever have to go through this maybe one day when they are older and they read it some small part will sink in and maybe just maybe they would take a little motherly advise. for now it will be in the back of the photo, not ready for them to read.â¦â¦â¦â¦â¦â¦â¦the journaling readsâ¦â¦â¦â¦â¦.I know there are people who donÃ¢â¬â ¢t believe in the Devil heck there are those who donÃ¢â¬â ¢t believe in God, well I strongly believe in both. You see I was Ã¢â¬ÅMARRIED TO THE DEVILÃ¢â¬? December 5th, 1987 My nightmare began I was a young bride a bride full of hope and so much love, the glow in my eyes say it all. I had a beautiful bridal shower and beautiful wedding rehearsal and a gorgeous wedding with all my family and friends all 250 of them (but that another story). My dress was made with Chantilly lace that I had a friend of my mom bring me from France, my earrings were my something borrow all 5 karats of diamond and 18 kt. Gold, (he came from a very rich Cuban family). The something blue was my garter and something old was my tiara that my sister wore on her Wedding day. So far all is beautiful and could not be more perfect. Getting out of the car at the church my father tells me Ã¢â¬Åyou are making a big mistake, he is not a good manÃ¢â¬? of course being the argumentative person that I was and still IÃ¢â¬â ¢m I answered Ã¢â¬ÅPipo, I love him and he is good to meÃ¢â¬? he stuck that pointer finger at me kiss me on my cheeks and said Ã¢â¬Åok, just know that you never should blame his kids for anything and I am here for youÃ¢â¬?. I was happy again and the first love of my life and my eternal love walk me to the altar and very skeptical gave me away. We honeymoon in Mexico, we were there 12 days, it was beautiful and although he showed some signs of selfishness and obsession I was too blind to see them. Only days after the honeymoon was over my world, was turned upside-down. I grew up in an instant. He would abuse me verbally every day for 3 ÃÂ½ years, did not allow me to visit my mother or call my mother, I only spoke to my grandmother but till today I donÃ¢â¬â ¢t know why that phone call he always gave to me. My mother was very worried and wanted me to leave him, and told me he will kill me one day. But of course I did not listen. Things just escalated more and more. He raped me so many times, he lied to me about having children he told me we would, but he had a vasectomy and never ever told me. I could not have friend and took all the money I made working and I never saw a penny of it. Five years into this horrible abusive and dangerous relationship, he had started to hit me more often by now I was an alcoholic at least my definition. My Turning point came after a road trip to New York and Mass. While in Mass we went to walk the Freedom trail I lost him, at Paul Reveres house, I had not a penny in my pocket (he never allowed me to have money) and no credit cards, but I made the best of it, I did not drink or eat anything since 9:30 am until I meet up with him by the train station at 6:00 am. (There were no cell phones at that time) he just looked at me and said I was an idiot. That night he raped me again but only this time was the last time. As soon as I got home I packed my bags and left him never ever to look back. October 1991 my nightmare ends. Never to allow anyone to abuse me again.

See All Projects by DianaRita