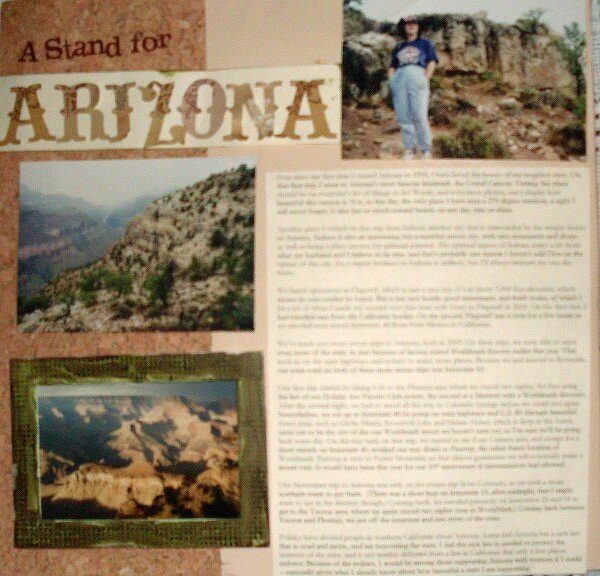 A Stand for Arizona

Yes, I state my stand on the politics of Arizona at the end of this LO and in the title - but it is essentially a travel LO about the natural beauty of this state I have visited four times. Photos above are all from the first trip, to the Grand Canyon in 1994.The journaling says "Ever since the first time I visited Arizona in 1994, I have loved the beauty of my neighbor state. On that first trip, I went to Arizona's most famous landmark, the Grand Canyon. Visiting this place should be on everyone's list of things to do! Words, and even most photos, can't display how beautiful this canyon is. It is, to this day, the ony place I have seen a 270 degree rainbow, a sight I will never forget.It also has so much naturual beauty on nay day, rain or shine.Another place I visited on that trip was Sedona, another city that is surrounded by the unique beauty of Arizona. Sedona is also an interesting but somewhat pricey city, with nice restaurants and shops, as well as being a place known for spiritual renewal. The spiritual aspect of Sedona strays a bit from what my husband and I believe to be true, and that's probably one reason I haven't sold Don on the virtues of this city. So a repeat trip to Sedona is unlikely, but I'll always treasure my one day there.We based operations in Flagstaff, which is just a nice city. It's at about 7,000 foot elevation, which means it's surrounded by forest. But it has nice hotels, good restaurants and thrift stores, of which I hit a lot when I made my second visit (this time with Don) to Flagstaff in 2003. On the first visit, I had traveled east from the California border. On the second Flagstaff was a stop for a few hours as we traveled west across Interstate 40 from New Mexico to California.We've made two more recent trips to Arizona, both in 2009. oN these trips, we were able to enjoy even more of the state, in part because of having joined Worldmark Resorts earlier that year. That took us on the state highways and byways to many more places. Because we had moved to Riverside,, or main road on both of these more reent trips was Interstate 10.Our first trip started by taking I-10 to the Phoenix area where we stayed two nights, the first using the last of our Holiday Inn Priority Club points, the second at a Marriot with a WorldMark discount. After the second night, we had to travel all the way to Colorado Springs before we could rest again. Nevertheless, we cut up to Interstate 40 by going on state highways and U.S. 60 through beautiful forest areas such as Globe-Miami, Roosevelt Lake and Heber. Heber, which is deep int he forest, turns out to be the city of the one Worldmark resort we haven't seen yet, so I'm sure we'll be going back some day. On the way back on that trip, we started in the Four Corners area, and except for a short stretch on Interstate 40, worked our way down to Pinetop, the other forest location of Worldmark. Pinetop is next to Porter Mountain, so that almost guarantees we will eventually make a return visit. It would have been this year for our 10th anniversary if circumstanes had allowed.Our November trip to Arizona was only on the return trip from Colorado, as we took a more northern route to get there.(There was a short hop on Interstate 15, after midnight, that I might want to see in the daytime though.) Coming back we traveled primarily on Interstates 25 and 10 to get to the Tucson area, where we again stayed two nights (one at WorldMark). Coming back, between Tucson and Phoenix, we got off the interstate and saw more of the state.Politics have divided people in southern California about Arizona. Some feel Arizona has a new law that is cruel and racist, and are boycotting the state.I feel the new law is needed to protect the interests of the state, and is not terribly different from a law in California that only a few places enforce. Because of the politics, I would be among those supporting Arizona with tourism if I could - especially given what I already know about how beautiful a state I am supporting.

See All Projects by Scrapbookjunction