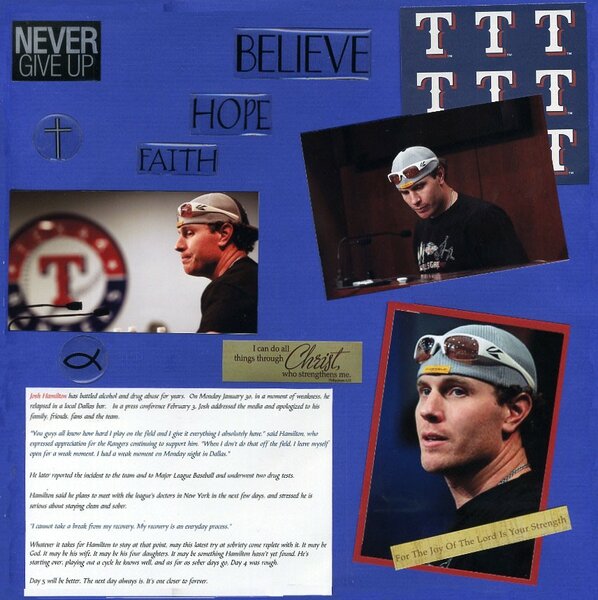 Josh Hamilton has battled alcohol and drug abuse for years. On Monday January 30, in a moment of weakness, he relapsed in a local Dallas bar. In a press conference February 3, Josh addressed the media and apologized to his family, friends, fans and the team.âYou guys all know how hard I play on the field and I give it everything I absolutely have,â said Hamilton, who expressed appreciation for the Rangers continuing to support him. âWhen I don't do that off the field, I leave myself open for a weak moment. I had a weak moment on Monday night in Dallas.âHe later reported the incident to the team and to Major League Baseball and underwent two drug tests.Hamilton said he plans to meet with the leagueâs doctors in New York in the next few days, and stressed he is serious about staying clean and sober.âI cannot take a break from my recovery. My recovery is an everyday process.âWhatever it takes for Hamilton to stay at that point, may this latest try at sobriety come replete with it. It may be God. It may be his wife. It may be his four daughters. It may be something Hamilton hasnât yet found. Heâs starting over, playing out a cycle he knows well, and as far as sober days go, Day 4 was rough.Day 5 will be better. The next day always is. Itâs one closer to forever.