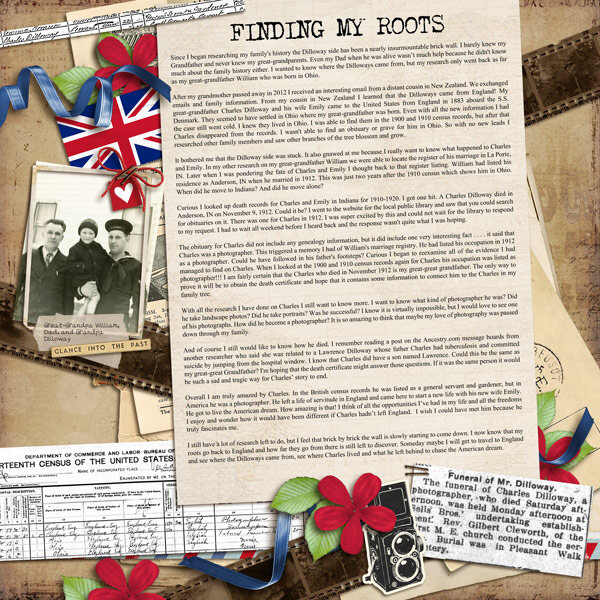 Journaling Says:
Since I began researching my family's history the Dilloway side has been a nearly insurmountable brick wall. I barely knew my Grandfather and never knew my great-grandparents. Even my Dad when he was alive wasnt much help because he didn't know much about the family history either. I wanted to know where the Dilloways came from, but my research only went back as far as my great-grandfather William who was born in Ohio.

After my grandmother passed away in 2012 I received an interesting email from a distant cousin in New Zealand. We exchanged emails and family information. From my cousin in New Zealand I learned that the Dilloways came from England! My great-grandfather Charles Dilloway and his wife Emily came to the United States from England in 1883 aboard the S.S. Denmark. They seemed to have settled in Ohio where my great-grandfather was born. Even with all the new information I had the case still went cold. I knew they lived in Ohio. I was able to find them in the 1900 and 1910 census records, but after that Charles disappeared from the records. I wasn't able to find an obituary or grave for him in Ohio. So with no new leads I researched other family members and saw other branches of the tree blossom and grow.

It bothered me that the Dilloway side was stuck. It also gnawed at me because I really want to know what happened to Charles and Emily. In my other research on my great-grandfather William we were able to locate the register of his marriage in La Porte, IN. Later when I was pondering the fate of Charles and Emily I thought back to that register listing. William had listed his residence as Anderson, IN when he married in 1912. This was just two years after the 1910 census which shows him in Ohio. When did he move to Indiana? And did he move alone?

Curious I looked up death records for Charles and Emily in Indiana for 1910-1920. I got one hit. A Charles Dilloway died in Anderson, IN on November 9, 1912. Could it be? I went to the website for the local public library and saw that you could search for obituaries on it. There was one for Charles in 1912. I was super excited by this and could not wait for the library to respond to my request. I had to wait all weekend before I heard back and the response wasn't quite what I was hoping.

The obituary for Charles did not include any genealogy information, but it did include one very interesting fact . . . . it said that Charles was a photographer. This triggered a memory I had of William's marriage registry. He had listed his occupation in 1912 as a photographer. Could he have followed in his father's footsteps? Curious I began to reexamine all of the evidence I had managed to find on Charles. When I looked at the 1900 and 1910 census records again for Charles his occupation was listed as photographer!!! I am fairly certain that the Charles who died in November 1912 is my great-great grandfather. The only way to prove it will be to obtain the death certificate and hope that it contains some information to connect him to the Charles in my family tree.

And of course I still would like to know how he died. I remember reading a post on the Ancestry.com message boards from another researcher who said she was related to a Lawrence Dilloway whose father Charles had tuberculosis and committed suicide by jumping from the hospital window. I know that Charles did have a son named Lawrence. Could this be the same as my great-great Grandfather? I'm hoping that the death certificate might answer those questions. If it was the same person it would be such a sad and tragic way for Charles story to end.

Overall I am truly amazed by Charles. In the British census records he was listed as a general servant and gardener, but in America he was a photographer. He left a life of servitude in England and came here to start a new life with his new wife Emily. He got to live the American dream. How amazing is that! I think of all the opportunities Ive had in my life and all the freedoms I enjoy and wonder how it would have been different if Charles hadnt left England. I wish I could have met him because he truly fascinates me.

I still have a lot of research left to do, but I feel that brick by brick the wall is slowly starting to come down. I now know that my roots go back to England and how far they go from there is still left to discover. Someday maybe I will get to travel to England and see where the Dilloways came from, see where Charles lived and what he left behind to chase the American dream.

See All Projects by Yzerbear19