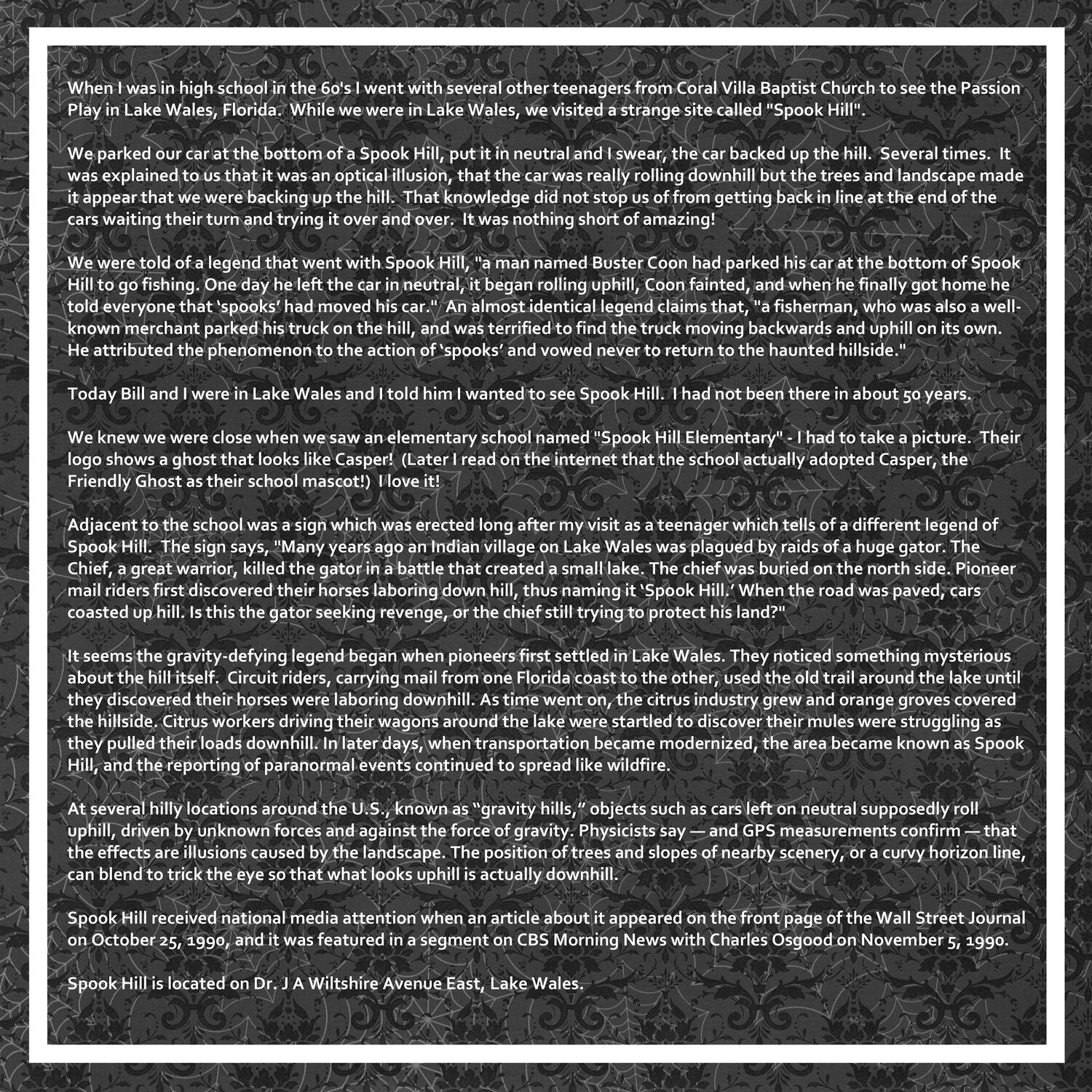 Give a Cheer
I had never heard of this place. What a great story and I love how you have journaled it!

Nvmagpie
December 06, 2016
That would be fun to experience!!

Hereiam
November 25, 2016
What a amazing story and I was intrigued through the whole story. You have such a gift of storytelling.

Scrapperbee
November 21, 2016
This image was printed from:

When I was in high school in the 60's I went with several other teenagers from Coral Villa Baptist Church to see the Passion Play in Lake Wales, Florida. While we were in Lake Wales, we visited a strange site called "Spook Hill".

We parked our car at the bottom of a Spook Hill, put it in neutral and I swear, the car backed up the hill. Several times. It was explained to us that it was an optical illusion, that the car was really rolling downhill but the trees and landscape made it appear that we were backing up the hill. That knowledge did not stop us of from getting back in line at the end of the cars waiting their turn and trying it over and over. It was nothing short of amazing!

We were told of a legend that went with Spook Hill, "a man named Buster Coon had parked his car at the bottom of Spook Hill to go fishing. One day he left the car in neutral, it began rolling uphill, Coon fainted, and when he finally got home he told everyone that spooks' had moved his car." An almost identical legend claims that, "a fisherman, who was also a well-known merchant parked his truck on the hill, and was terrified to find the truck moving backwards and uphill on its own. He attributed the phenomenon to the action of spooks' and vowed never to return to the haunted hillside."

Today Bill and I were in Lake Wales and I told him I wanted to see Spook Hill. I had not been there in about 50 years.

We knew we were close when we saw an elementary school named "Spook Hill Elementary" - I had to take a picture. Their logo shows a ghost that looks like Casper! (Later I read on the internet that the school actually adopted Casper, the Friendly Ghost as their school mascot!) I love it!

Adjacent to the school was a sign which was erected long after my visit as a teenager which tells of a different legend of Spook Hill. The sign says, "Many years ago an Indian village on Lake Wales was plagued by raids of a huge gator. The Chief, a great warrior, killed the gator in a battle that created a small lake. The chief was buried on the north side. Pioneer mail riders first discovered their horses laboring down hill, thus naming it Spook Hill.' When the road was paved, cars coasted up hill. Is this the gator seeking revenge, or the chief still trying to protect his land?"

It seems the gravity-defying legend began when pioneers first settled in Lake Wales. They noticed something mysterious about the hill itself. Circuit riders, carrying mail from one Florida coast to the other, used the old trail around the lake until they discovered their horses were laboring downhill. As time went on, the citrus industry grew and orange groves covered the hillside. Citrus workers driving their wagons around the lake were startled to discover their mules were struggling as they pulled their loads downhill. In later days, when transportation became modernized, the area became known as Spook Hill, and the reporting of paranormal events continued to spread like wildfire.

At several hilly locations around the U.S., known as gravity hills, objects such as cars left on neutral supposedly roll uphill, driven by unknown forces and against the force of gravity. Physicists say  and GPS measurements confirm  that the effects are illusions caused by the landscape. The position of trees and slopes of nearby scenery, or a curvy horizon line, can blend to trick the eye so that what looks uphill is actually downhill.

Spook Hill received national media attention when an article about it appeared on the front page of the Wall Street Journal on October 25, 1990, and it was featured in a segment on CBS Morning News with Charles Osgood on November 5, 1990.