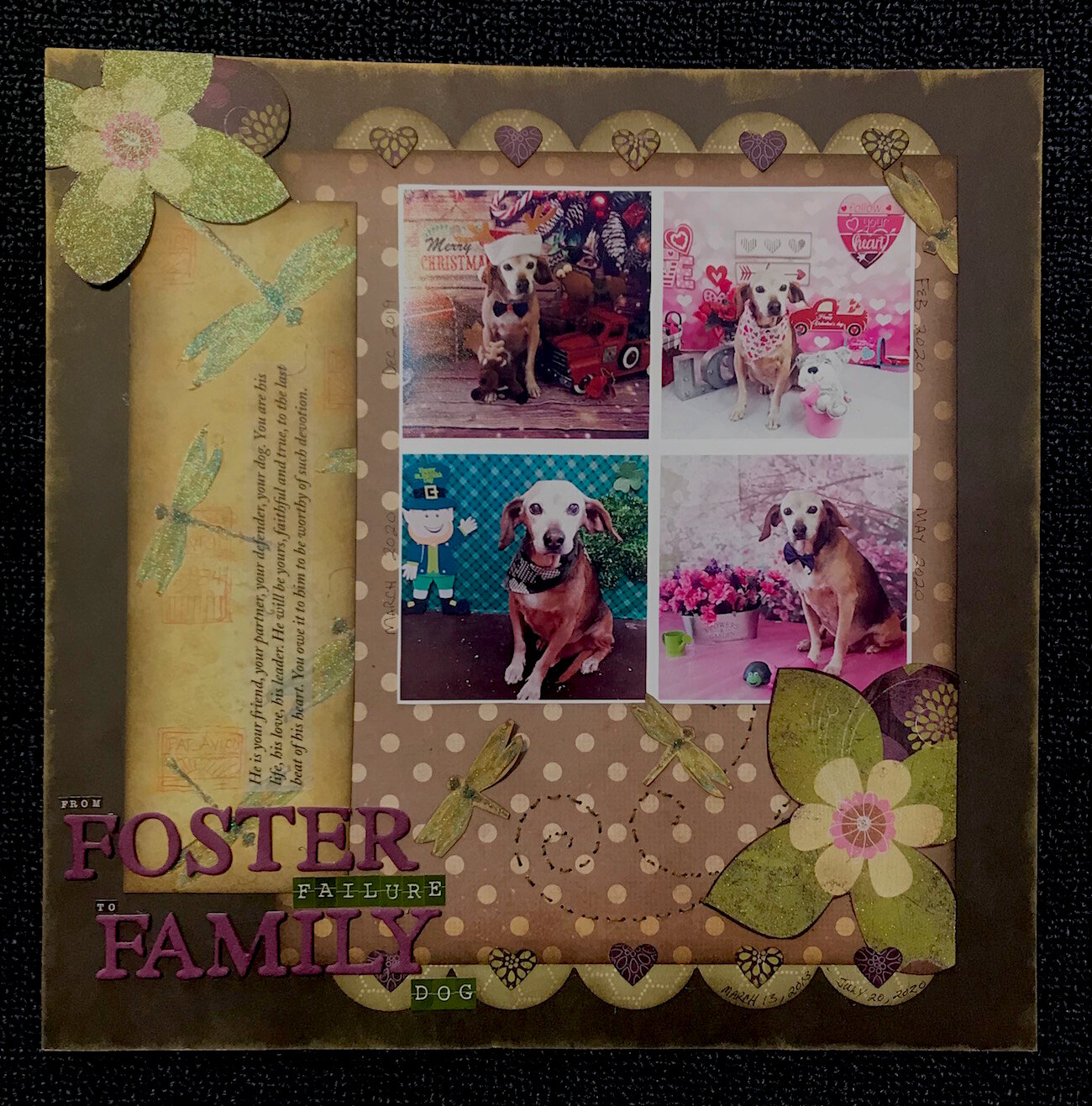 Pink Spoonbill
March 22, 2021
What an inspirational story. I am sorry for your loss. You made a wonderful tribute to Riley. Sure like the circles with the hearts. Well done.

CrimsonMama
March 06, 2021
I'm sorry for your loss. I am surprised that the vet even suggested that you not be present when he had to go. Here, they hope you will be because otherwise it can be much more traumatic for the animal. Very hard though. So, again, I'm so sorry but glad that you gave him a good life with you. Liking his collage photo poses. Like the dragonflies and also the stitched flourished trails you've created for them.

Rolbricht
March 01, 2021
A touching story. He was obviously meant to be with you.

Fabricfrenzy
February 23, 2021
WOW, what a amazing story... You gave him his forever home and I know that he was truly grateful! So, sorry for your loss. Thank you for sharing this heartfelt story and beautiful page to go with it.

Fabricfrenzy
February 23, 2021
Beautiful layout and photos. The journaling is so heartfelt and really hit home with me. We just had to let go of our precious Sophie less than two weeks ago. We got her when she was just 5 wks old and she would have been 14 this May. Our home is so empty now, as she was the last of our dogs. Over the years we've had six dogs. I don't think I have it in me to get another because it's so hard letting go... We were blessed that our vet made a house call and Sophie was able to pass here in her own bed, with all of us around her. So, so sorry for your loss.

Pennguins
February 20, 2021
I loved reading this story! You gave him a wonderful life! Your page sure turned out darn pretty too!

Scrapanda
February 20, 2021
A deeply touching story! The beautiful and thoughtful way you put together this tribute to Riley speaks of the special bond between the two of you. You poured your heart and emotions into this LO and it shows. It is because of people like you that unwanted animals become loved family members! TFS!

Scrapperb2
February 19, 2021
Ya know the sayin' "Dogs pick their owners" right??? He looks so handsome all gussied up.

from FOSTER failure to FAMILY dog

This is my Leftovers Layout project for February. Everything on here is a leftover piece from another project - nothing new allowed for this challenge.

Riley joined our family in March of 2013 as an adult dog of undetermined age or origin (common belief was mostly beagle). He was picked up running the streets in Midwest City (suburb of OKC) with another dog, sent to the city pound, and pulled out by the rescue that I was assisting as a foster family. The rescue sent him to the vet to be neutered and then he waited in boarding for someone to get him out of the vet kennel and take him home to assess his temperament. He'd been there almost a month when the "all call" went out about poor Riley still being in boarding and getting depressed and lonely. My previous dog had just found his forever family, and I asked several questions about this hound. How big is he? Seriously, how big?

As soon as the rescue confirmed him at about 25 pounds, and small mid-sized, I went to pick him up from the vet's office. As always, the first stop on the way home was for chicken nuggets, and I guess that sort of sealed the deal for him because although I took him to five different outreach events and placed him with a family four different times, he never stayed with anyone for more than three days.

He'd whine and pace, then elevate to howling, and eventually work himself up into eating sofa cushions and chewing the chair legs. I'd get a call, "Riley's not working out, can you take him back?" and I'd go pick him up from whatever family he was living with and take him home. He usually made a beeline to his dog bed and slept for 24 hours straight after one of these ordeals. After the fourth one, the rescue wrote on his paperwork, "not suitable..."

Which was weird because he was the best dog I ever met. He ended up with his CGC-A certification, became a Paws to Read dog, went to visit people at nursing homes and the library, sponsored classes at the horse shows, and was just a genuine happy dog - until I had to leave him with someone when we went on vacation. I learned after the first time, it was just easier to have someone come house sit because as long as he was in his own house, he was fine. Take him and leave him somewhere, and he was a wreck....

Except for the groomer. He loved going to see Miss Lynn, and for as homely a hound as he was, she always managed not only to get him cleaned up, but also to get a lovely glamour shot to send me each month. These are the last four I have - the one in the bottom right corner is the very last photo I have of him.

Riley lived with me from 2013 to 2020 - so seven years - and he was an adult dog when I got him, so it's impossible to know just how old he was, but as he aged, his face went white and he developed cataracts. Then he went deaf. Then senile. He'd wander into a room and just stand there looking around at nothing and after a few minutes he'd wander out again into another room to repeat the process.

Eventually, he lost enough of his "good boy" training that he quit being able to get to the door to go outside to go to the bathroom. He began to have accidents on the tile (always the tile, never the carpet, thank heavens) more often than not, and that's when I drew the line. He'd have been extremely distressed had he understood what he was doing because he spent his entire life with me doing his best to be a good dog.

I called the vet, made an appointment, and Riley and I went for a last ride in the car. We stopped off to say good-bye to Miss Lynn on the way. My vet was going to take him to the back room, and I said, "please, no. He needs to stay with me for this. He will be terribly upset if you separate us, so can we just do it here? I don't want him to be frightened."

Dr H was a little concerned about my being overly traumatized by the process until I explained that I had seen this happen multiple times with dogs and horses both, that I knew what to expect, and while I was sad about it, I was also sure that I did not want my little dog to leave this world without the comfort of hearing my voice as he went.

He was so very very tired - I had no idea how weary he was of living - but I know that had it been up to HIM, he'd have stayed. I know he trusted me and I think he was grateful that I had made the decision for him. I have no doubt in my mind that he is sitting waiting at heaven's gate and will continue to sit there until I arrive because he's not planning to go in until I do. And then he'll be wagging his whole body in impatient excitement and hopping with happiness to see me.

I knew this project was going to be hard to do because there is such finality to it. But once again, I am amazed at how blessed I've been to share my life with yet another amazing dog, and I know that I'll continue to work at being the person my dog thinks I already am.

Thanks for stopping by and letting me share this. It's been cathartic.

See All Projects by GentlewoodFarms