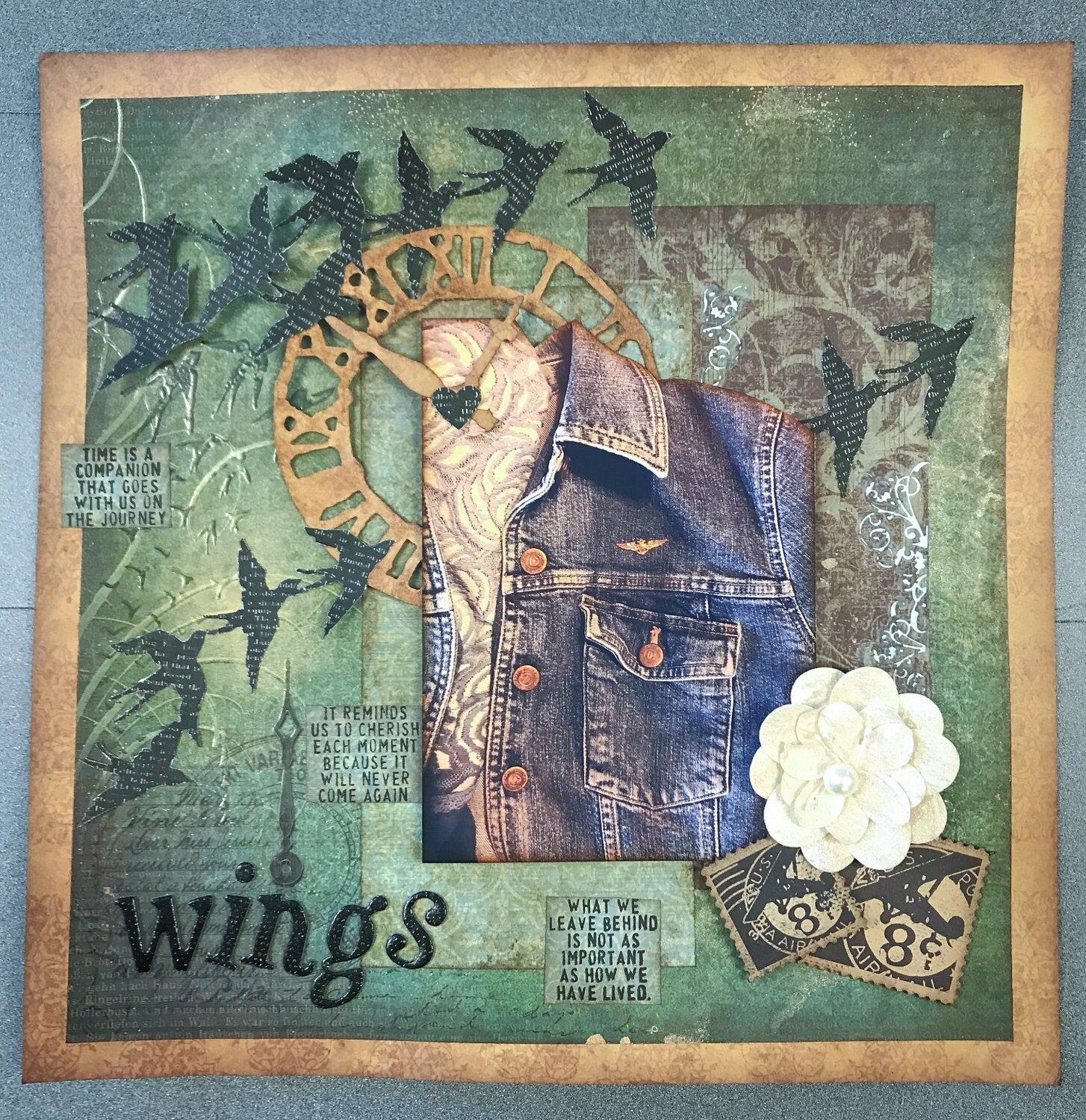 Give a Cheer
Your journaling is always touching and heartfelt. This layout pays tribute to the man who was your "Daddy" and the strong independent woman you became. Perfect additions for a perfect layout.

Fabricfrenzy
April 14, 2021
WOW.... That is a tearjerking story. What an amazing memory and tribute to his gift to you both. My Dad visited friends and family his last year. When he visited my brothers and me, (he lived in Oregon and we live in Southern California) he ever said anything about probably be his last time seeing us. But, in my heart I knew.

Fabricfrenzy
April 14, 2021
This is an amazing story. The layout is beautifully done and I think it is a real sweet memory!

Scrapanda
April 14, 2021
Love this layout. What an incredible story and tribute.

SaraHunz
April 12, 2021
Bless your heart. It took strength and courage just to do this beautiful page. Like the steampunk look. Love the birds flying to the heavens.

Scrapperb2
April 11, 2021
What a beautiful tribute, the memories will forever remain in your heart. TFS

Scrapperb2
April 11, 2021
WoW, this is a stunning Page! And the story is very touching.

Pennguins
April 11, 2021
Very nice! What a fabulous story! What special memories you have with this layout :o)Ro

Rolbricht
April 11, 2021
Such a beautiful tribute to your Dad. He sounds like an incredible man. This LO is beautiful.

BonniePratte
April 10, 2021
This is beautiful and so touching. Wonderful tribute and so well done.

Bransonscrapper
April 10, 2021
This is such a touching story, thank you for sharing. Your tribute to your Dad is amazing. Beautiful layout, love the birds flying across the page towards heaven.

Beverly Salmon
April 10, 2021
Wow, well I cried, what a touching story Pat. What a precious gift to receive and what a greater gift to be with him as he "got his wings". the page is beautifully scrapped, I LOVe the birds flying across the page. This one needs to be framed

Pink Spoonbill
April 10, 2021
What an incredible story. Your layout is the perfect tribute to your amazing Dad and the strength he gave to you. LOVE all the wonderful accents especially the birds flying across the page.

Pink Spoonbill
April 10, 2021
Thank you for sharing your very moving story. The sense and beauty of it unfolds in your LO. Beautifully done!

Nvmagpie
April 10, 2021
Thanks for sharing the story behind this cool layout and picture! I love it! That Tim Holtz stamp is a favorite and I have used it on cards and a layout also. Nice work, my friend!

Christmas of 2012, my father gifted both my sister and me with a pair of military issued Naval Aviator wings. None of us realized it at the time, but he was going about the business of tying up the loose ends of his life, and he had spent a good deal of time processing the required paperwork to have these sent to him so that he could award them to his daughters. Neither of his sons got a pair  just his girls.

In the world of jet aviation, your wings are handed to you by your flight instructor and they mean that you are ready to "fly solo." The only people who can legally award them are aviators. Daddy was a Marine Corps flight instructor back in the day, but I don't know how he managed to secure these for Becky and me. I DO know that he wanted us to know that he was proud of us and that he trusted us to take care of things after he was gone, that he was able to let go of being the man we relied on because we were able to rely on ourselves.

They are the last gift he gave me.

The last conversation Daddy and I had was about flight path vectors, although I did not realize it at the time. He told me, "I'm not sure just how I'm going to get there." I replied, "Daddy, the Navy will get you there. You just have to show up in your flight suit."

He passed away November of 2013, at 7 minutes to 1 in the morning, one week after the Marine Corps birthday. I was sitting up with him, with my aviator pin on my pajamas, and was blessed to watch him as he flew from this world to the next one.

Anytime I have to do a job that takes courage and bravery, I always wear my wings. My daddy was the bravest man I've ever known, and it helps to know that he is flying close to me when I need him.

This particular day, I had to haul two horses to Oklahoma State University for a friend, who needed them to be euthanized and did not have the strength to do it herself. She asked if I would do it because you're good at this.

My Week 14 Anything Goes Weekly Challenge

This project took me a LOT longer than it should have. I had a lot of trouble getting all the elements to come together. I think I may go back and add a little "glitz" to the birds with maybe some glossy accents or clear enamel or something, but for now, it's just done and I'm glad to have it behind me instead of staring at me from my desk asking "well, are you FINISHED yet?"

I'm going to run it through some other challenges as well, but I never know which ones until I upload and start posting it where it belongs.

See All Projects by GentlewoodFarms