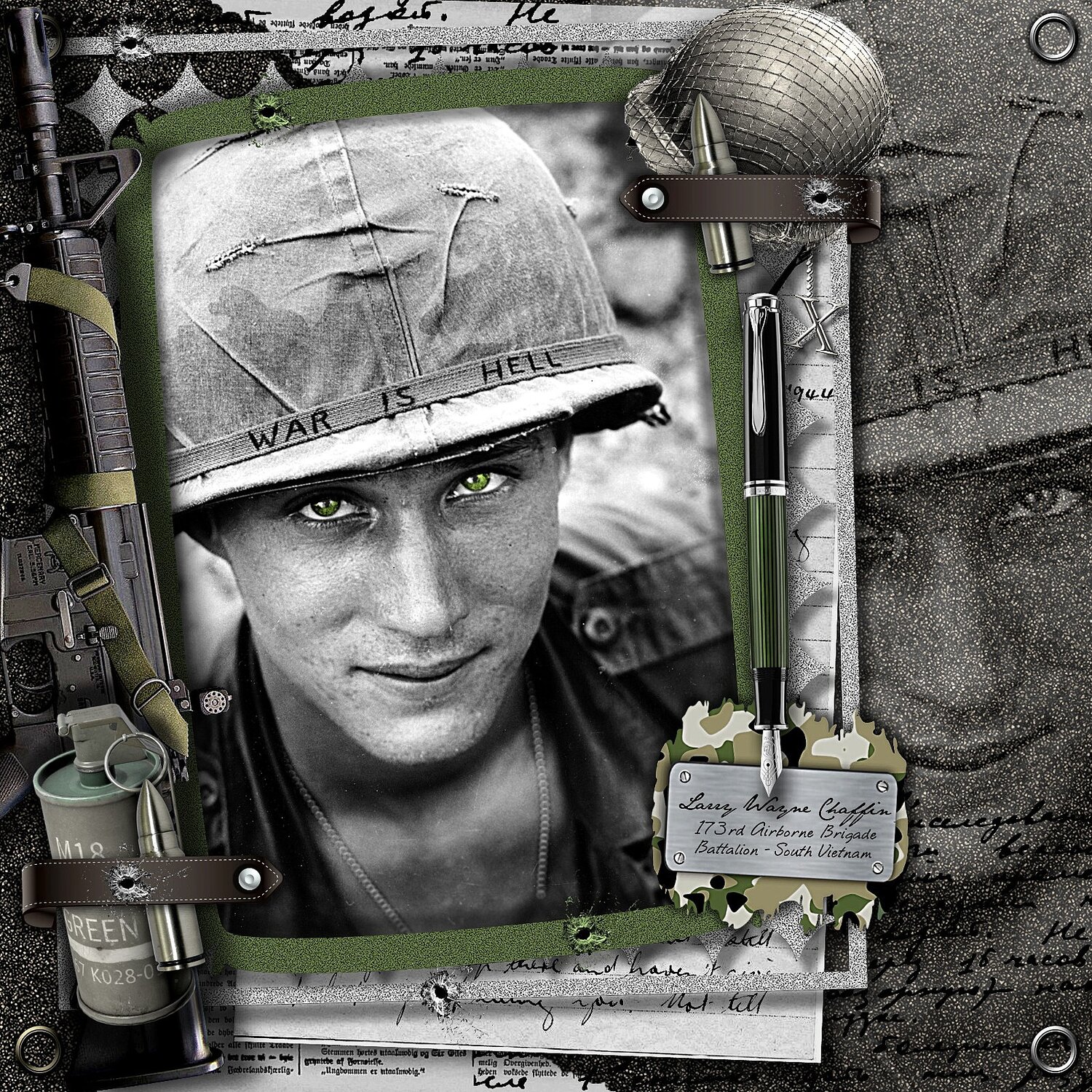 WAR IS HELL (Larry Wayne Chaffin): Let me introduce you a famous soldier's photograph that has been gong viral for many years without anyone knowing his name.
This is his amazing story: "I salute you"! A Soldier's Quote: "I'm still a soldier, fighting with my pen and paper for peace till the day I cease."

German photographer Horst Faas began his career at the age of 21. He was a photojournalist during the Vietnam War and took a
handful of iconic photos of the time period. One of the most famous pictures is War is Hell. On June 18, 1965, Faas wrote in his notes:
the unidentified Army solider picture was shot June 18, 1965, and the soldier was with the 173rd Airborne Brigade Battalion on
defense duty at Phouc Vinh airstrip in South Vietnam. For a while, this was the only information known about this photo.
The soldiers identity was a complete mystery.

Faass picture grabbed the attention of many because of one main element: contrast. The soldiers bright eyes contrast heavily with the
darkness of the rest of the photo. Hes young and smiling innocently, despite his position as a soldier fighting in a very complex, mature war.
Take the helmet out, and this could easily be a high school yearbook photo. Most importantly, his eyes lead the viewer to the words
written on his helmet: War is Hell.

Years later, Fran Chaffin Morrison revealed that the soldier in the photograph was her late husband, Larry Wayne Chaffin. The two met
while Chaffin was stationed at Fort Gordon, Georgia; they married when Chaffin was 17 and Fran was 16. Chaffin served for a year in
the 173rd brigade, beginning in May 1965. When the photo was taken, Chaffin was only 19 years old. He was discharged from the army,
and his wife gratefully met him at the airport upon his return home. Tucked under his arm was a copy of the Stars and Stripes publication
that featured the photograph of the unidentified soldier. He showed it to his wife and jokingly told her, That picture is going to make me
rich some time. His portrait was printed in the St. Louis Post-Dispatch special about soldiers returning home, along with his name in the caption.
There was no doubt the photo was of Chaffin. -WAR IS HELL-

"The soldier above all others prays for peace, for it is the soldier who must suffer and bear the deepest wounds and scars of war."

"The brave men and women of the military should always be honored for their sacrifice. For those who risk their lives to protect
our freedom, it is a selfless act of valor that is done without asking anything in return."

- Soldier's Photograph (Larry Wayne Chaffin) - Taken by photographer Horst Faas
(Horst Faas was a German photo-journalist and two-time Pulitzer Prize winner. He is best known for his images of the Vietnam War)

- Papers, embellishments and effects all by me.

Scrappin' for fun and to commemorate "A Special Soldier".
©XenaPrincessWarrior

See All Projects by XenaPrincessWarrior