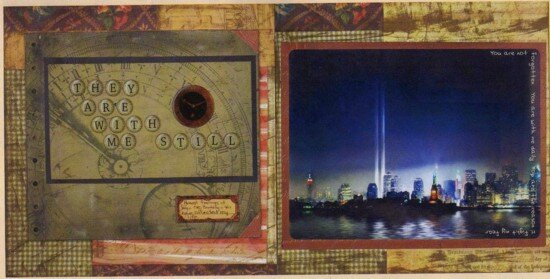 Give a Cheer
Your pages and journalling are awesome. My heart goes out to you. I can imagine your fears for your family and yourself and admire your steadfast, determined and positive attitude. God Bless You and keep you all safe. You are in my prayers. Mo (UK)

Monica Inspired
May 03, 2007
Wow! Your journaling is absolutely beautiful. If you are a wimp then so am I, because I sat here crying while I read it. And I agree totally with Kym C.

Sarah Doodah
April 03, 2007
I don't think you are a wimp! This is beautiful. I am still amazed that I sat and watch it all unfold live on TV (west coaster) and then got dressed and went to work like normal, as we all did. We were walking zombies for a month or so but I just felt duty bound to carry on. It all seems strange to me now. I hope we never forget how we felt that day.

TITLE:
You are with me still - honest feelings of how OKC Bombing and 9-11 have affected my life


(If you read the journaling, you may think I am a wimp, I am just being very honest and sincere.)


JOURNALING:
Five years ago tomorrow, I took the bus to work. I had not noticed anything or anyone. My mind was wandering, wishing I was back at home with my 5 month old Sandi. I went back to work, from maternity leave, only a few weeks before. Every day was a battle to bring myself to go to work. I just wanted to be home watching every new thing my baby girl was doing.


I got off the bus and stopped at Starbucks to get my coffee.


As I was walking in, one of the women said, 'Isnt it just a perfect day, the sun is out, the temperature is perfect, and there isnt a cloud in the sky.'


I glanced up and realized she was talking to me, 'Yes, you are right, it is a perfect day!', I said suddenly feeling more happy.


I went on to work. Shortly after arriving, my cell phone rang. It was Mom.


'A plane just flew into the World Trade Center', she said.


'Oh my God!' I exclaimed. 'Did the pilot have a heart attack?' I questioned.


I ran down the hall of FBIHQ to go to my bosss office, he had a television. I saw the reports of the plane and went back to my desk, thinking of all the people in the plane and in the building and how terrified they all must have been.


A few seconds later, my cell phone rang again. It was Mom. 'A second plane hit the other World Trade Center building.'


Now there was no doubt, it was a terrorist attack. Mom very calmly said, 'There are a few planes in the air that have not been accounted for.'


We got off the phone with our I love yous.


Let me step back in time. When I worked the Oklahoma City Bombing, I got there seven days after McVeigh took his revenge on the government for the tragedy at Waco. I got there when the rescue effort was still underway. I got there when there were still hundreds of family members waiting by the fence that blocked of the site to keep the civilians away from the building. They stood vigil at that fence day in and day out, hoping and praying that their loved ones were one of the victims, who by some miracle were rescued alive. I was there when those same people would return to place memorial items at the fence after their loved ones were found dead. They had come to the site as a hallowed ground to mourn. My heart broke for them. It was the hardest thing I have ever witnessed in my life.


Around two years prior to 9/11/2001, FBIHQ shut down the tour route. Information had been received that Usama bin Laden was going to bomb FBIHQ. The threat was serious enough that they shut down the FBI Tour to the public.


The cell phone rang again, it was Mom. She was calmer than before. 'Honey, there is a fire reported at the Pentagon.' I immediately thought of how the press works, whenever there is a crisis, their immediate reaction to any thing is that it is related.


'I dont know, there are still planes unaccounted for,' she said in her soothing voice. We got off the phone again, with our I love yous.


A few minutes later, one of the women in the office blurted out that a plane had hit the Pentagon. She was panicking as she said, 'Pam, I am scared.' We were on one of the top floors of the Hoover building, should a plane hit, we would likely be right in the middle of it.


'Get out of the building,' I said strongly, firmly, but calmly.


'But, they have not released us yet,' she said dismayed.


'It doesnt matter, get out of the building,' I repeated as I was locking up and gathering up the things I needed to go home. She too was packing up her stuff.


I quickly went down the hall and departed the building. I had my white Norton McNaughton wool blazer on and the button got caught in the turnstile as I was leaving. I yanked it free of the turnstile, I didnt care if the blazer was ruined. I just wanted to get away from the building. I was determined not to have my family be one of the 'families at the fence'.


One of the secretaries from our floor was behind me, she said, 'You almost ripped your jacket.'


'Its ok,' I replied. My heart was nearly beating out of my chest. I was terrified. Where do I go? Do I get on the subway? What if they are planning an attack on the subway too?


I called Mom to let her know I was out of FBIHQ. The minute I heard her voice I started to cry. 'This is too close, Mom. It is too close.'


'I dont know where I am going, but I am getting out of here. I dont want you guys to be the family at the fence.'


She needed no further explanation, she knew how deeply I was affected by the events I witnessed in Oklahoma.


I quickly called Javier and told him I was leaving and had no idea where I was going. He told me that there were bombs going off all over DC. He said there was a report of a truck bomb at the State Department and a report of a plane flying into the USA Today building in Rosslyn.


'I am going to have to risk getting on the Metro,' I told him. 'Can you pick me up somewhere?'


'Yes, meet me at the Dunn Lorring station,' he said.


I looked up and realized I was standing under a large cement overhang of the entrance of a condemned department store. I thought back to the slab of concrete that hung from the Murrah Building in Oklahoma. Mother was the name of the slab because all the employees that went to the site said that if the multi ton slab fell, it would be a Mother. Suddenly, I heard planes flying very close to the ground. I was reasoned it was probably to protect the city, but stepped out from under the slab of concrete anyway.


I got on the Metro, it was packed with no room left for anyone. We didnt even have to hold on to anything because you literally could not move. My cell phone went out of service, all the phones in DC did. The subway didnt go all the way to Dunn Lorring, it turned around a few stops prior. I found a phone booth and finally got a call to Javier. He pulled up at the Metro. The minute I saw him, I cried. I just want to see Sandi, just get me to Sandi. I said. He told me both towers of the World Trade Center had fallen. I could not believe it. I could not even begin to fathom the terror they must have gone through.


We drove home and my boss called and asked me to report to the SIOC (crisis center). I said I would, but I had to see my daughter first. 'Ok, report there first thing in the morning,' he replied sensitive that I had just come back to work from maternity leave.


The next two months were spent 14-18 hours at day at SIOC. I missed so much of Sandis little advances during that time. The only night I insisted I get to home on time was Halloween. I could not miss her first Halloween.


Well, like I said, it is five years ago tomorrow. It is hard facing this war we are in. Jihad they call it. There are radical Muslims that feel we have invaded their countries and they want us out, so they are waging a war on the United States. It is so hard to see all the threats, most of them so vague you could not begin to pin them down every day. I am scared for the two of you. I know we are doing our best, I just hope it is good enough. They are a clever adversary and have no issue with making innocent children their victims. In fact, the higher the death toll and the more spectacular event, the more it serves their purpose. I am scared about working so close the a major target. But, in my heart, I have to fight. I have to fight beyond the fear to wage the war against them. It is my duty as a Mom, it is my duty as an FBI employee, it is my duty as a citizen of the United States. We have to stop their efforts to terrorize us. I fight beyond the fear as a way of not letting them win.


I am scared about tomorrow. I work very close to the Pentagon, it is a target. I have a plan for how to get home in the event something happens. My route is planned out. We have a family plan of how to go about getting the girls and where to go, should something tragic happen. I will go to work, I will be scared, but I will be defiant, they will not win!

See All Projects by Pammax