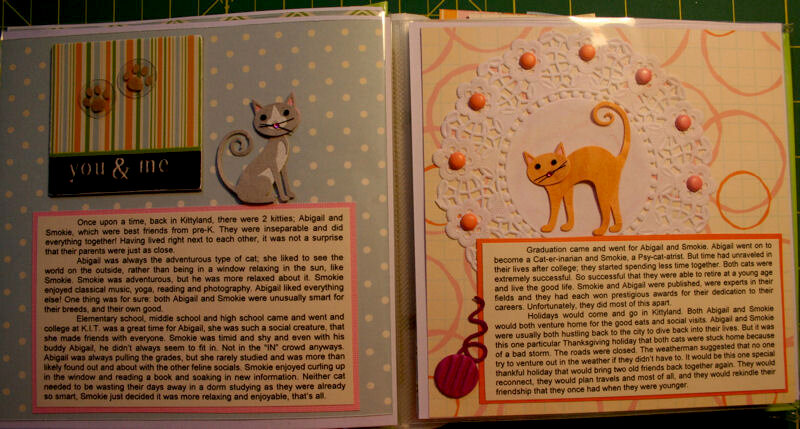 Give a Cheer
Very cute story. I know my daughter would love this. Are you going to publish it anywhere but here?

Once upon a time, back in Kittyland, there were 2 kitties; Abigail and Smokie, which were best friends from pre-K. They were inseparable and did everything together! Having lived right next to each other, it was not a surprise that their parents were just as close.
Abigail was always the adventurous type of cat; she liked to see the world on the outside, rather than being in a window relaxing in the sun, like Smokie. Smokie was adventurous, but he was more relaxed about it. Smokie enjoyed classical music, yoga, reading and photography. Abigail liked everything else! One thing was for sure: both Abigail and Smokie were unusually smart for their breeds, and their own good.
Elementary school, middle school and high school came and went and college at K.I.T. was a great time for Abigail, she was such a social creature, that she made friends with everyone. Smokie was timid and shy and even with his buddy Abigail, he didnt always seem to fit in. Not in the IN crowd anyways. Abigail was always pulling the grades, but she rarely studied and was more than likely found out and about with the other feline socials. Smokie enjoyed curling up in the window and reading a book and soaking in new information. Neither cat needed to be wasting their days away in a dorm studying as they were already so smart, Smokie just decided it was more relaxing and enjoyable, thats all.
Graduation came and went for Abigail and Smokie. Abigail went on to become a Cat-er-inarian and Smokie, a Psy-cat-atrist. But time had unraveled in their lives after college; they started spending less time together. Both cats were extremely successful. So successful that they were able to retire at a young age and live the good life. Smokie and Abigail were published, were experts in their fields and they had each won prestigious awards for their dedication to their careers. Unfortunately, they did most of this apart.
Holidays came and went in Kittyland. Both Abigail and Smokie would both venture home for the good eats and social visits. Abigail and Smokie were usually both hustling back to the city to dive back into their lives. But it was this one particular Thanksgiving holiday that both cats were stuck home because of a bad storm. The roads were closed. The weatherman suggested that no one try to venture out in the weather if they didnt have to. It would be this one special thankful holiday that would bring two old friends back together again. They would reconnect, they would plan travels and most of all, and they would rekindle their friendship that they once had when they were younger.