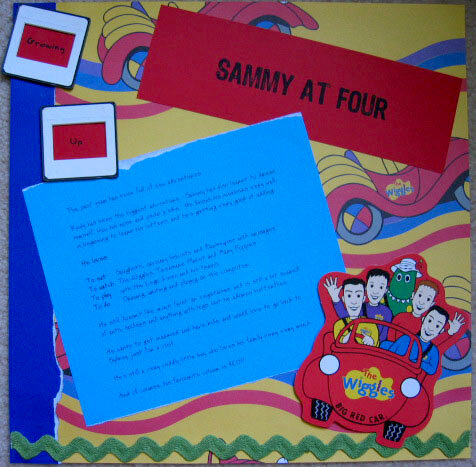 The past year has been full of new adventures.

Kindy has been the biggest adventure. Sammy has also learnt to dress himself, blow his nose and pedal a bike. He knows his numbers very well, is beginning to learn his letters, and hes getting very good at adding.

To eat Spaghetti, savoury biscuits and Barbeques with sausages.
To watch The Wiggles, Treasure Planet and Mary Poppins
To play with the Lego, k-nex and his trains.
To do Drawing, writing and playing on the computer.

He still doesnt like much fruit or vegetables, and is still a bit scared of ants, spiders and anything with legs, but he adores butterflies.

He wants to get married and have kids, and would love to go back to Sydney, just for a visit.

And of course, his favourite colour is RED!!


And the journalling on the right page reads:

THESE PHOTOS WERE TAKEN AT STURT RESERVE PLAYGROUND, MURRAY BRIDGE DURING THE KINDYS END OF YEAR PICNIC, MONDAY, 6/12/2004. DESPITE RAIN ALL MORNING, AND A THUNDERSTORM AT MIDDAY, A GOOD TIME WAS HAD BY ALL. A HIGHLIGHT WAS MAKING THE GLITTERY FLYING BUTTERFLIES.

See All Projects by HillsCass