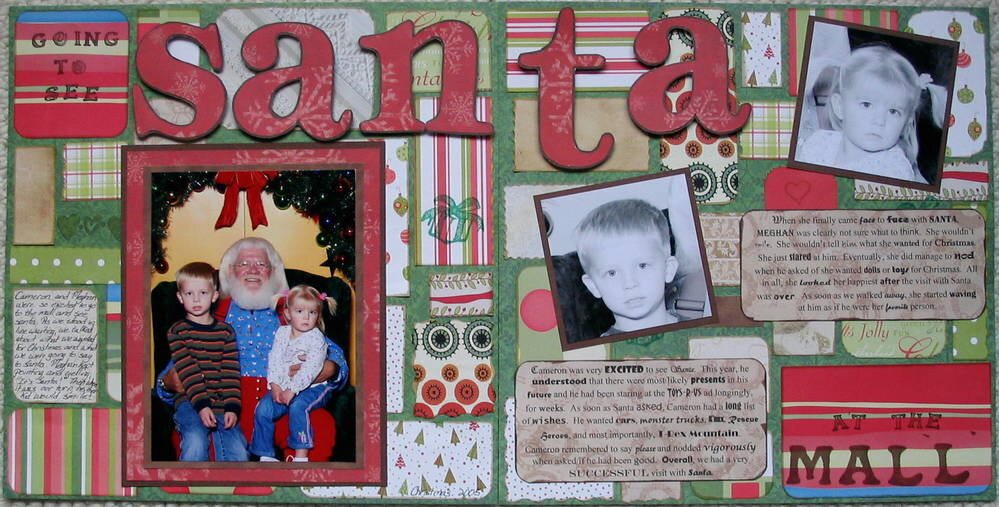 Give a Cheer
love the pp blocking. I always hated the santa thing, so you are lucky you didn't have tears!

Cougbri
March 14, 2006
Love the title and the pp blocking. I must remember to try that.

Scrapperbee
March 11, 2006
WOW! i love how this looks like a quilt, and the pics are adorable (even if not too happy)!!

CharlotteJ
March 10, 2006
Ha! I added this to my faves and then started reading it only to see why I like it so much! LOL!!! This is super and I think I'll lift it from you! I have tons of Christmas scraps...this is a perfect fit for them.

Traceys Footprints
March 10, 2006
love all the papers and the journaling! Geat job!

Senora_x
March 08, 2006
WOW!! Love it! Great job on using all the scraps of paper and I love the big chipboard Santa title!

SaraS
March 08, 2006
Wonderful Work - the patchwork of color is reviving.

Cheryljunegirl
March 08, 2006
This image was printed from:

Seeing Santa at the Mall

This is a LO of my kids going to see Santa - Not the happiest picture! - LOL! I got the idea for the background from one of Scrap_Happy_Mom's scraptathlon entries. (Thanks Tracey!). I cut the letters in Santa out of chipboard to give them a little dimension against all the different patterns of paper. (i'm not shopping anymore this month so I had to improvise)

Going to See Santa at the Mall
(left page) - Cameron and Meghan were so excited to go to the mall and see Santa. As we stood in line, we talked about what we wanted for Christmas, and what we were going to say to Santa. Meghan kept pointing and yelling, &quot;It's Santa!&quot; Then when it was our turn, neither kid would smile!

(right page) - When she finally came face to face with Santa, Meghan was clearly not sure what to think. She wouldnt smile. She wouldnt tell him what she wanted for Christmas. She just stared at him. Eventually, she did manage to nod when he asked of she wanted dolls or toys for Christmas. All in all, she looked her happiest after the visit with Santa was over. As soon as we walked away, she started waving at him as if he were her favorite person.

Cameron was very excited to see Santa. This year, he understood that there were most likely presents in his future and he had been staring at the Toys-R-Us ad longingly, for weeks. As soon as Santa asked, Cameron had a long list of wishes. He wanted cars, monster trucks, Knex, Rescue Heroes, and most importantly, T-Rex Mountain. Cameron remembered to say please and nodded vigorously when asked if he had been good. Overall, we had a very successful visit with Santa. 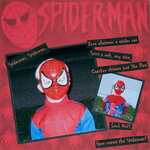 See All Projects by Scrapnbug