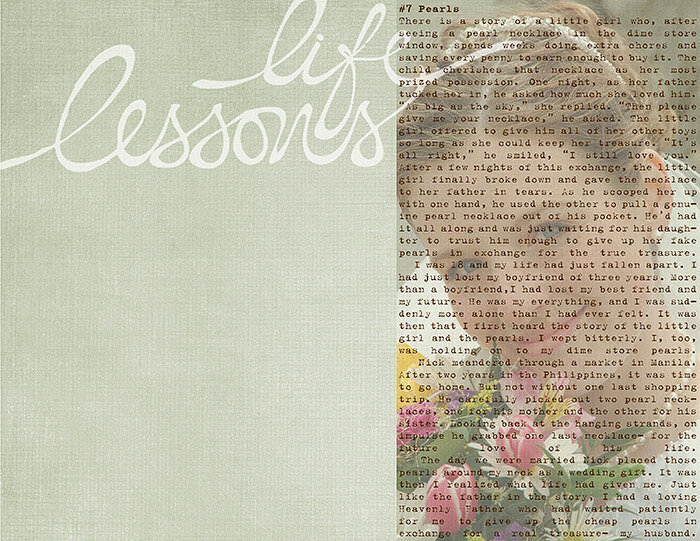 This is a redo of a page I made years ago, but have never put in an album because it never quite fit. It will be perfect in my life lessons book!

Journaling: There is a story of a little girl who, after seeing a pearl necklace in the dime store window, spends weeks doing extra chores and saving every penny to earn enough to buy it. The young girl cherishes that necklace as her most prized possession. One night, as her father tucked her in, he asked how much she loved him. As big as the sky, she replied. Then please give me your necklace, he asked. The little girl offered to give him all of her other toys so long as she could keep her treasure. Its all right, he smiled, I still love you. After a few nights of this exchange, the little girl finally broke down and gave the necklace to her father in tears. As he scooped her up with one hand, he used the other to pull a genuine pearl necklace out of his pocket. Hed had it all along and was just waiting for his daughter to trust him enough to give up her fake pearls in exchange for the true treasure.
I was 18 and my life had just fallen apart. I had just lost my boyfriend of three years. More than a boyfriend, I had lost my best friend and my future. He was my everything, and I was suddenly more alone than I had ever felt. It was then that I first heard the story of the little girl and the pearls. I wept bitterly. I too was holding on to my dime store pearls.
Nick meandered through the market in Manila. After two years in the Philippines, it was time to go home. But not without one last shopping trip. He carefully picked out two pearl necklaces  one for his mother and the other for his sister. Looking back at the hanging strands, on impulse he grabbed one last necklace  for the future love of his life.
The day we were married Nick placed those pearls around my neck as a wedding gift. It was then I realized what life had given me. Just like the father in the story, I had a loving Heavenly Father who had waited patiently for me to give up the cheap pearls in exchange for a real treasure 
my husband.

See All Projects by StevieKay