Scrapbook.com Exclusives UP TO 50% OFF + Free Gift | Details Here.
× 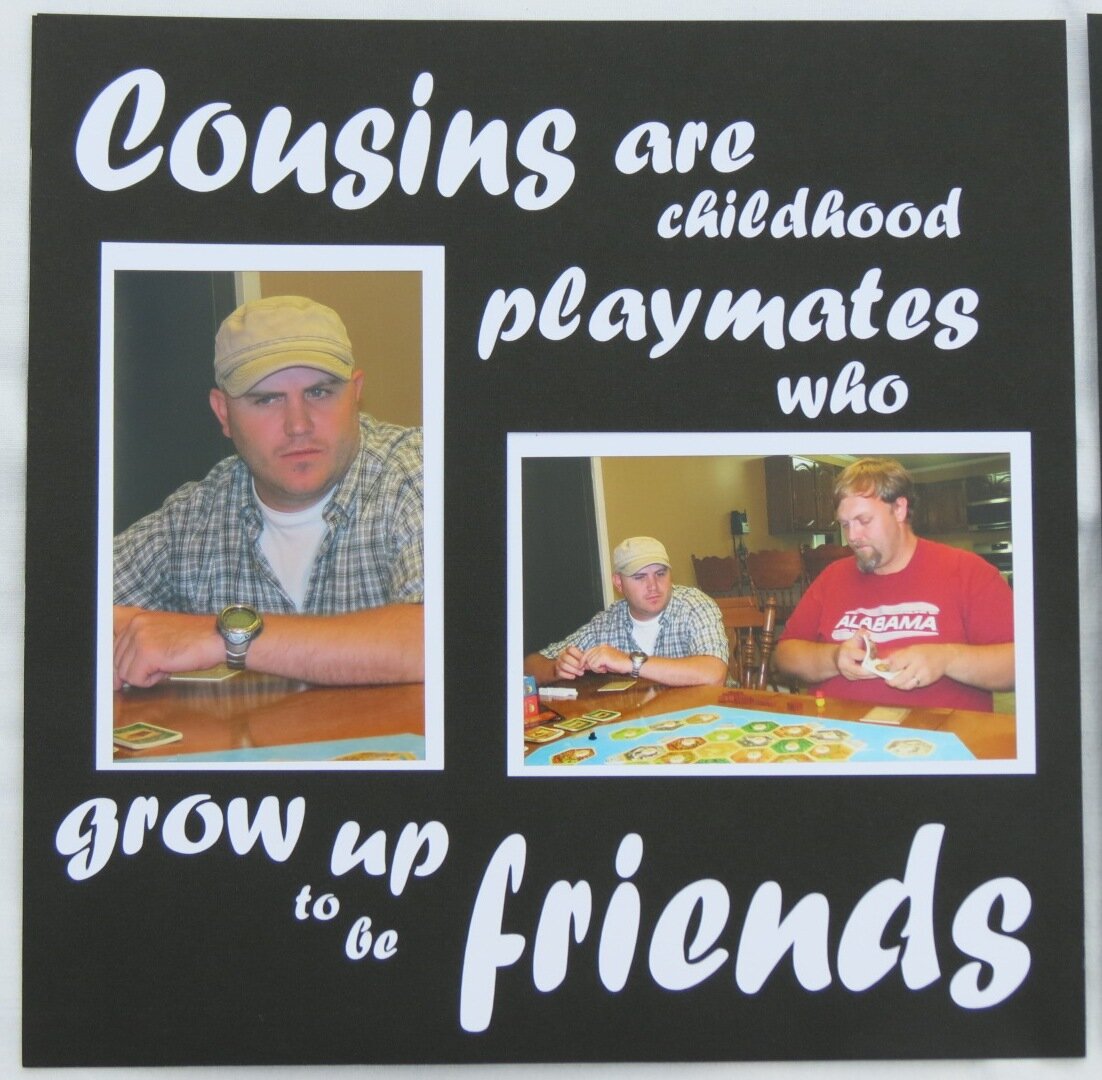 Give a Cheer
By the time I'd read all the rules, I would be to tired to play!

SETTLERS OF CATAN
And the Winner is JOE!!!

Brandon explained the rules to Joe, and as you can see by his face, he was totally confused.

Seven of us played the game that night, Brandon and Amanda, Randy and Denvia, Bill and me and Joe. Brandon also helped Bill and Joe and Amanda coached me what to do. When it was over, Joe had won but had no idea what happened.

*I just looked up the rules and this will explain why Joe looks so confused: The players in the game represent settlers establishing colonies on the island of Catan. Players build settlements, cities, and roads to connect them as they settle the island. The game board representing the island is composed of hexagonal tiles (hexes) of different land types which are laid out randomly at the beginning of each game;[4] new editions of the game also depict a fixed layout in their manual, which has been proven to be fairly even-handed by computer simulations, and recommend this to be used by beginners.

Players build by spending resources (brick, lumber, wool, grain, and ore), represented by resource cards; each land type, with the exception of the unproductive desert, produces a specific resource. On each player's turn, he or she rolls the two six-sided dice, determining which hexes produce resources. Any players with settlements or cities adjacent to hexes marked with the number rolled receive resource cards of the appropriate type. There is also a robber token, initially on the desert; if a player rolls 7, the robber must be moved to another hex, which will no longer produce resources until the robber is moved again; the player may also steal a resource card from another player. In addition, when a 7 is rolled, all players with more than 7 resource cards must discard half. However, the player gets to choose which half of their resource cards they must discard. Also, if a player has an odd number of cards over seven, such as 9, the player will round down when determining how many they will discard.

Players are allowed to trade resource cards among each other if both parties to the trade agree on the terms; players may also trade off-island (in effect, with the non-player bank) at a ratio of four of one resource for one of any other. By building settlements in certain spots on the edge of the board (ports), players may trade with the bank at three-to-one (3 of any single resource type) or two-to-one (two of a specific resource) ratios, determined by the port's location.

The goal of the game is to reach ten victory points on one's turn. Players score one point for each settlement they own and two for each city. Various other achievements, such as establishing the longest road and largest armies, grant a player additional victory points.